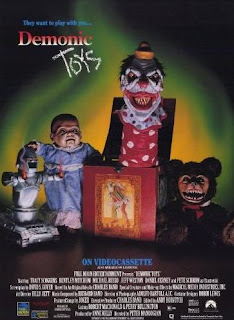 Demonic Toys is one of those films that I'm a little embarrassed to tell people that I enjoyed. The title and plot promise low grade entertainment and it delivers. To be honest I might have even enjoyed this little B-movie more than Full Moon Entertainment's more popular counter-part Puppet Master.

Originally made as Dangerous Toys, Full Moon no doubt changed the title to make it sound a little more schlocky, and boy oh boy does the film quality match its new schlocky title. The film opens with two cops, who also happen to be lovers, tracking down some ruthless criminals. They kill her partner, she flips out and goes suicidal wounding him and chasing the thug into a toy warehouse in the dead of night. Boy did they pick the wrong toy warehouse to go into! Get this as apparently the warehouse is built over the grave of demon and this demon wants to be reborn so he resurrects a handful of toys (a baby doll, a teddy bear, a robot and a clown jack in the box) for them to bring him the women cop so he can posses her unborn child. Now it's up to a night time security guard and a reluctant fast food delivery boy, also locked in the building, to save her and kill the demonic toys.

Like the Puppet Master franchise, our Demonic Toy character steal the show from our cast. Our baby doll character (named Baby Oopsy) is a foul mouth little bastard and though he says some pretty juvinille shit, some of it still made me chuckle. The teddy bear just growls but becomes terrifying in a schlocky way when it grows to giant size to chase our protagonists around. For me, it's the demonic clown in the jack in the box that 's my favorite as it pops out on more than one occasion to gruesomely bite people in the face. All these toys are brought to life with John Carl Buechler's equally schlocky special effects. His effects are not always the best but they definitely have a low budget charm to them.

Director Peter Manoogian handles David S. Goyer's (Blade Trilogy) silly material well by giving it some dark comedy but not ruining the streak of serious horror in the process. He is also utilizes the low budget well since the writers thought correctly for the plot to take place almost entirely in one location so the money could be used to give the film a higher quality look.

For what it is, Demonic Toys works. It's a low budget romp with enough violence, gore, and laughs to appease most B-movie fanatics. A few pieces of dialogue to make me cringe (Baby Oopsy's "I can shit my pants, can you shit your pants?" comment and how our demon character constantly refers to sex as "the nasty") but this is definitely one of Full Moon's most entertaining releases. The Demonic Toy characters returned for two cross-over sequels (Dollman vs. the Demonic Toys and Puppet Master vs. Demonic Toys) before getting their own sequel in 17 years later in the simply titled Demonic Toys 2.