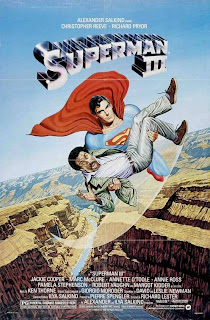 Right away we know we are in trouble with this sequel as it doesn't have the grand opening title sequences like the first two had. The opening credits are shown at the bottom of the screen during the outrageously dumb opening sequence and are ghostly and hard to read as they are quickly swept away. Where's my grand titles and music? The opening sequence doesn't help things as it shows Superman as Clark Kent leaving work only to have Murphy's Law go apeshit all around him. I'm not kidding as anything that can go wrong does! It's a chain of events, started by unknowingly by klutz Kent, as one bad thing leads to another and soon we even have some guy drowning in his car as he ran over a fire hydrant! Yes that is as dumb as it sounds. Thankfully Superman finally realizes what he caused and saves everyone. We then get introduced to a new character, a reluctant computer genius played by Richard Pryor. What is Richard Pryor doing in a Superman movie your asking? More on that later. Pryor is a guy down on hard times until he gets hired by a computer company and finds out that he has the uncanny knack to program and build computers. Noticing a glitch in the system, he is brought into a meeting with the companies owner (Robert Vahn, feebly filling in the villain role for Gene Hackman) and he convinces Pryor to help him build a supercomputer to change the Earth's weather patterns all in the good name to make a profit.

In the mean time Superman, over his crush on Lois Lane no doubt because he fucked her in the last film, decided to take a little time off and heads back to his home town where he meets an old school mate, cue in the love interest theme! He also finds time to save kids about to be run over by combines and to put out oil refinery fires.

The main problem with this sequel is they attempted to go with a more comical approach and it backfires so hard that the engine falls out. The addition of Richard Pryor makes this film forget to laugh at its own joke. Nothing against Pryor as he was a comedic genius but he has no business being in a Superman movie. His character is also focused on almost as much as Superman himself! Apparently in an interview Pryor said he wanted to be in a Superman film so the filmmakers decided to write a sequel around him... hence those writers deserve to be sent to Krypton's "Phantom Zone" along with the likes of the writers of the Supergirl spin-off.

Another problem is our villain Robert Vaughn. I like Robert Vaughn and he usually plays villains well but here he is just a boring, uninteresting carbon copy of the Lex Luther character from the original. Sorry guys, this villain sucks! Also where the hell is Lois Lane in this film? Part of the first two films' charm was the banter between Kent and Lane and she is mysteriously MIA and only appears in a few scenes. According to interviews, Margot Kidder and Richard Pryor were so coked out on set that they would disappear together only to be found fucking each other. She also was very vocal about how the producers were wrong about firing Richard Donner on Superman II. No wonder they decided to basically write her out!

I don't always hate movies that I give 2 stars to. Hell I actually enjoy a most of them even though they are bad. Though Superman III is a movie I gave 2 stars I will admit up front I didn't enjoy it and in fact it annoys the living shit out of me. This sequel just makes me cringe and I can't believe that the director of the surprisingly good Superman II was responsible for this. The franchise still forged on after this with the even worse Supergirl spin-off a year later as well as two more Superman films.