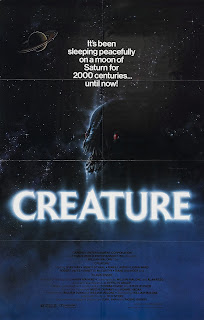 Inseminoid proved to me that the British didn't know what it took to make an entertaining trashy rip-off of Alien so I decided to go back over the ocean to view a home grown Alien rip-off in the form of Creature. Out of all the rip-offs that I have seen, Creature takes the cake as being the most complete rip-off copying everything from the strong female lead to the actual creature design.

Here we have an American crew landing on a remote planet (another remote planet, go figure!) to investigate a landing of a rival German spacecraft which they have lost contact with. When boarding they find the whole crew has been obliterated by an alien creature that they unwittingly released from some other alien species "pet collection". The alien of course makes its way on board the American vessel and starts killing and controlling various crew members by placing parasites on their head. If you have seen Alien, then you can connect the dots on the rest of the film.

Despite being a complete rip-off of Alien, I actually had a lot of fun with Creature which was refreshing compared Inseminoid which I had just viewed. Director William Malone loads the film up with some good shots, nice darkly lite ships, a cool new wave 80's style and an abundance of gore! Gorehounds should be extremely pleased!

The cast is also good for this type of trash film. Wendy Schaal is our strong female lead which is no doubt a take on Alien's Riply character. Schaal is a major babe and makes for some nice eye candy to go along with the gore. We also get cult actor Klaus Kinski as the head of the German space ship. He is a good actor and it just brings a smile to my face whenever he appeared in these low budget genre films. Yes he is a little old to be casted as an astronaut but his presence brings the film up in quality.

Out of all the trashy Alien rip-offs I have seen, for my money Creature is the second best only after the schlocky classic Galaxy of Terror. It's got a great cast and gory effects to make this an entertaining trashy cash-in. Sadly out of all our major players in the Alien rip-off category, Creature is the only film not to receive a high quality DVD release. Even the shitty Star Crystal got widescreen treatment and Creature only gets a cruddy "public domain" release from Diamond Entertainment. My old Media Entertainment release on VHS has better quality than this crap DVD. Creature deserves for some cult DVD company to pick up and release in a high quality release. Look at the sales figures for Shout Factory's releases of Galaxy of Terror and Forbidden World. Yes there are fans of these B-movies and Creature deserves to be re-discovered by trash fanatics.