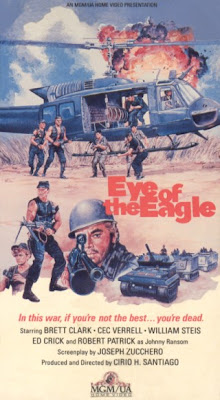 Antonio Margheriti may be the king of likable cheesy 80's Italian actionploitation but halfway around the world in the Philippines, a Filipino director by the name of Cirio H. Santiago was also making a name for himself in the cheesy low budget world of actionploitation. The one difference is his films tend not to be nearly as likable or enjoyable as his Italian counterparts. Eye of the Eagle is no exception.

Though Santiago flirted with a Vietnam War film in his First Blood rip-off Final Mission, Eye of the Eagle would mark his first full fledged Vietnam War film which desperately tries to copy the macho hero successes of Rambo: First Blood Part II and Missing in Action. Here we get a lame Rambo type hero in the form of Brett Baxter Clark who seems a rather oddball with his blond highlighted 80's hairdo despite the film taking place in 1970. He is in charge of a military assassination group called "Eagle" (catchy code name isn't it?). After a botched mission our group comes in contact with a reporter who has proof of an existence of a rebel American military group made up of MIAs. This rebel group just happens to be headed by the same asshole that killed Brett's brother in cold blood! Brett and his trusty sidekick (Robert Patrick, pre T-1000 role!) set out to shoot lots, and lots of bullets.

When it comes to no brain action, Eye of the Eagle could be the dictionary definition. No thought goes into this plot what-so-ever and it seems machine guns are fired through most of it's 90 minute run time. Everything cliché in an war action film is here, including a typical bar fights and double crosses. All aspects of this film are just downright poor, from its writing, to its editing, to its acting. Hell even the sets are so damn cheap that they almost fall down when Robert Patrick slams a door! You also got to love that ultra lame model helicopter explosion at the end.

The absolute worst part however is the jarring editing during the action sequences. Whenever an explosion goes off, the film has a very jarring edit before people go flying. The film is filled with these awful edits! This is the cheap filmmakers way around action sequences as he cuts at an "opportune" times to switch people out with stunt men. I have never seen this an action film utilize this technique so much and so badly.

I enjoy no-brain 80's action as much as the next guy but Santiago's action outings tend to be not only no-brain but also brain killing. It has some amusing unintentional laughs but this comes nowhere near the enjoyment factor of other cheesy Vietnam flicks produced in Italy and America. The Last Hunter... now that's a likable B-grade Vietnam war flick. My advice is to check out the work of Margheriti instead. If for some God forsaken reason you were floored by the awesomeness of Eye of the Eagle... don't worry, it was followed by two sequels!

Eye of the Eagle Trailer
Posted by Cronosmantas at 10:54 AM