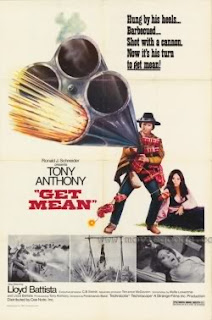 The spaghetti western genre was on its last leg going into the late 70's and filmmakers frantically tried new ideas as a desperation to keep the films fresh and interesting. Some westerns went too far trying to make something new and different and Get Mean falls in this category by taking the spaghetti western into extreme absurdity.

Our film opens atmospherically with our "stranger" (Tony Anthony) being dragged by a horse down a dusty valley while tied to the back. Once the horse arrives in a windy ghost town it drops over dead and our stranger stumbles into a bar which happens to have a handful of people who take him in and feed him. It's only 5 minutes into the movie and I am already going WTF. They offer him 50 thousand dollars to take a princess back to Spain (supposedly we are in America) so she can lead her people to defeat "barbarians" taking over her kingdom. Suddenly a group of Vikings break into the bar and our stranger takes them out. He agrees to take our princess back to Spain but once they arrive in Spain, she gets kidnapped by some barbarians after a huge battle that is no less than 10 minutes long! Still wanting his money he pulls a Yojimbo and starts playing sides against each other until the film falls completely apart with incoherency.

Nothing makes a lick of sense in this film as it flows poorly from one absurd sequence to another. In one scene we have our stranger entering into a haunted church and starts literally getting slapped around by a ghost, then cut to him in a cave and suddenly an explosion occurs, cut to him emerging on the surface again completely painted black due to the explosion and then gets chased by an angry bull, then cut one more time to him falling back in the cave. The film has no flow yet it's like a train wreck and one can't keep their eyes off of it. Our villains even attempt to roast our stranger for dinner for Christ sake!

Tony Anthony (my friend Bill thinks his name is hilarious as it is literally "Tony Tony") wins the award for the most bizarre spaghetti western star in Italy as all his western team-ups with director Ferdinando Baldi are strange. He's definitely no Clint Eastwood, Franco Nero or the likes but he does have a charm about him and he adds a lot of humor and funny one liners to the character. I like Tony Tony and he definitely kept my attention to the stitched together plot.

The tone of this film is quite bizarre and it's a mish-mash of genre's with the spaghetti western mold. The tone actually reminds me a lot of Army of Darkness and it makes me wonder if Sam Raimi somehow was able to see this film before getting inspiration for his cult classic. It's just a damn shame the plot is so incoherent! Fans of bizarre alternative cinema will definitely want to hunt this strange flick down.

Bonus Rant: At the beginning of the film it is shown that strange silver orbs "overlooking" our stranger as he is drug into town and they make an appearance at the end also. The orbs got me got me interested but the damn film explains nothing about them! They could video cameras for aliens overlooking our stranger for all I know!