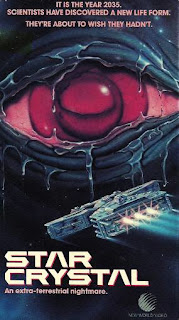 Oh Lord! What have I done to thee to be cursed with such shitty Alien rip-off in my VHS collection? I mean look at that glorious old VHS artwork. Doesn't that promise a schlocky good time in the vein of Galaxy of Terror and Forbidden World? That awesome VHS artwork sure fooled me and I was sadly dished up a big bowl alien liquid shit instead.

This Alien rip-off has a group of astronauts while exploring a new planet (throwing a football in zero gravity no less!) discover what looks like a baked potato wrapped in tin foil. They bring the damn thing aboard only for what looks like a gooey sock to crawl out (yes boys, if you masturbate into a sock and leave it under your bed it CAN grow into a lifeform!). Later we are introduced to another group of people aboard a space station and do to some electrical malfunction the station blows up! So finally, what seems about halfway through the film we are finally introduced to our main characters who are on a spaceship that just managed to escape the explosion of the station. Sadly this vessel that escaped also has that gooey sock creature which has grown to be the size of a large dog. Our dog sized snot ball decides to start killing off our crew one-by-one, Alien style!

This complete Alien rip-off suffers the most from low production values. I mean the production designer couldn't even design a ship which has hallways no one can stand in! I shit you not the crew has to crawl on their hands and knees to every room! Everything from the shit design of the ship, to the effects, to acting, and to the none-existent directing is AWFUL to the highest extent. It's so damn bad that I only could watch half of the film when I originally bought it at a pawn shop for a measly 50 cents. My sister and I however later found the film to have plenty of unintentional laughter so I easily got my 50 cents worth.

Overall this is a horrible Alien rip-off in the highest degree. This comes nowhere near the entertainment value of Creature or the above mentioned Roger Corman productions. This is definite bottom drawer Alien rip-off material. However just because it's awful doesn't mean it doesn't have some great unintentional laughs. Make sure to listen to the lovable "Crystal of the Star" ballad played throughout the end credits!

Bonus Rant Part I (Spoiler): Our Alien at the end is revealed to be a good alien after he has become a born-again Christian by reading the bible in the ships computer. What!? The damn thing even has the gale to tell our last survivor that he only killed the other crew members because they threatened it in some way. What? The damn think chased one woman around a room and it thinks SHE threatened it! Bullshit!

Bonus Rant Part II: Later VHS releases and the DVD release (which I haven't upgraded to yet) have a very deceptive cover artwork. The artwork was changed to have a more threatening looking Alien and crew-members sleeping in hypersleep tubes. This new artwork was no doubt created to make this look like even more of an Alien rip-off than it already was. Nice try fellas!

Written By Eric Reifschneider
Posted by Cronosmantas at 5:20 PM