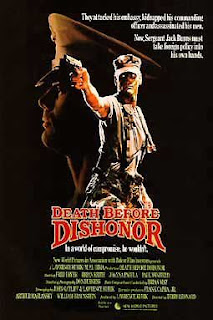 I will admit I have a soft spot for over-the-the-top cheesy 80's, politically incorrect action films. This is why I enjoy the output of Cannon Films so damn much. Invasion U.S.A., Missing in Action 1-3, Delta Force, Commando, Rambo II & III though not "good" films get regular spin time in my DVD player. They are just so damn much fun! I went into Death Before Dishonor with this same mentality as it fits the criteria. It's from the 80's, it's cheesy, it's politically incorrect... but it's just missing one ingredient. That ingredient is "entertaining."

Our film has a marine whose commander gets kidnapped by some terrorists while stationed in the middle east so going against the American ambassador's wishes and goes to rescue him. That's it.

Since this is a cheesy 80's action film I didn't expect a great plot but at least make the plot interesting! This plot is just a snooze fest and it has bland characters to match it. Though I enjoy Fred Dryer in his popular role in the television show Hunter, I found him at odds as an "action hero" here. Perhaps with a better film he could have made is mark in the cheesy 80's action category but his "action hero" character here is completely uninteresting. Since the character's are uninteresting we don't care if they live or die no matter how much the music tries to make us! The score tries hard, too hard, to compensate for the lack of emotions on screen. In a sequence where one of Dryer's soldiers bites it, the music comes in so forceful to try to make the audience know it's a sad moment. The music was so obtrusive here the sequence came out more unintentionally funny than sad. The villains are also superficial and hardly seem like any threat what-so-ever.

The film just comes off completely forgettable and thus lacks the fun, B-movie elements that Cannon action films were so grand at supplying. The film is a definitely B-action film but it doesn't go that extra mile to be over-the-top and fun and instead it just comes out boring and forgettable. Death Before Dishonor is a forgotten 80's action film and it deserves to remain just that. Potential viewers are recommended just to pop in The Delta Force again.