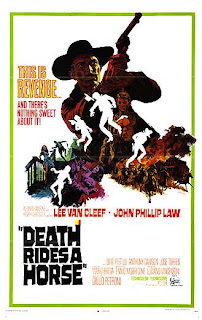 Lee Van Cleef is my personal favorite Spaghetti Western star. I saw most of his other films this wonderful genre has to offer before finally being able to lay my eyes up on Death Rides a Horse. The reason it took me so long to view as it only seems to be released on ultra crappy, public domain DVDs with cruddy transfers. My hopes became high when MGM released a high quality Region 2 disc and I crossed my fingers that they would bring that wonderful transfer over to the states. Well it's been five or six years and no dice. This is just one of the many films I'm fucking sick of waiting for from MGM/Sony to get off their lazy asses to release so I finally broke down and viewed one of the public domain DVDs. All I have to say I definitely saved one of his best for last.

Our film opens on a rainy night where a group of five men break into a ranch house, rape and kill a mother and kill a father leaving their child alive. In grand Spaghetti Western revenge fashion the boy grows blinded by rage for revenge in a fifteen year span. Also in this 15 year span our character Ryan (Lee Van Cleef) gets released from prison also hungry for revenge against his partners that put him there. Lee kills a man who happens to wear the same spurs of one of them men that killed the boy's parents. When our young man gets word, he follows Cleef to get to the men but there is one problem, they both want revenge on the men so who should draw first blood?

The interaction between our two characters is wonderful as though they both have contempt for each other, they each end up saving each other's lives on numerous occasions. Not only are the characters great but so is the directing by Giulio Petroni who gives the film a great atmosphere with his great camera shots. It's a damn shame that he didn't direct more. The problem that keeps this from being as good as Leone's efforts is some choppy editing. Also our young gunmen sees a red flashback of rage every time he sees a man that he recognizes from that rainy night. After about the third flashback it gets a little ridiculous and hokey. The "twist" at the end also isn't surprising and any viewer paying attention to the plot with pick up on it far before the end.

Update: Wild East has just released "Death Rides a Horse" on DVD in anamorphic widescreen! The transfer is beautiful! Head to amazon.com or wildeast.net to purchase your copy before they run out. It's a limited edition so act fast!