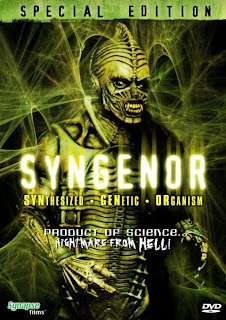 For some damn reason the VHS cover artwork to Syngenor stuck in my mind since my childhood. I'm not sure why though as the VHS artwork isn't that great but for some reason it stuck. That and for the fact this B-monster film stars "Re-animator" star David Gale got me to buy it at a cheap price. After viewing the film and listening to the DVD commentary I was surprised to learn it is actually a sequel to a low budget film made 9 years prior titled Scared to Death. Nowhere on the box art will you find information that this is a follow-up no doubt because the DVD distributors didn't want to connect this film to an ultra low budget film made years before that not many people have seen. The makers of the movie even had this mentality as there is no reference to the events of the first film and no characters or direct plot carry over other than the beastly Syngenor itself.

Our film opens with some high class jackasses taking some high priced prostitutes to a "high tech" lab to show them some Syngenors only to have them meet bloody demises. It seems that our greedy corporation is into military weapons and their new weapon is a genetically made monster called a "Syngenor", and in case you didn't see the first film that stands for SYNthesized GENetic ORganism. These monsters were designed for desert combat and get their fluid intake by drinking the spinal fluid of their victims. Our greedy corporation (headed by the late great David Gale!) sends out a Syngenor to kill the genetic scientist that created them as he quit the company. The Syngenor succeeds but the scientist's daughter becomes a witness so she and a reporter (they always seem to team up with reporters in these type of films) join together to take the corporation down, that is if they can beat an army of Syngenors first!

Syngenor can be fun at times for a low budget monster romp but it's budget really hinders the scope of the film. The Syngenor suits look good but they don't have quite the scary image they had in the first film Scared to Death. Perhaps it's due to the fact director George Elanjian Jr. decides to film them in well lit areas as opposed to keeping them darkly lit like original director William Malone. The high tech lab where the Syngenors are kept is obviously a kitchen of a hotel with white sheets covering up all the kitchen equipment. Still with such a low budget the filmmakers seem to have done a credible job.

The acting is off kilter as some of the actors take this hokey material seriously and others ham it up. David Gale shines in this film and he had his tongue firmly in his cheek with his performance. His character starts out subtle but by the end he was a stark raging mad! I had a ball with his performance and it really added to the fun nature of the film. My favorite part of his performance is towards the end when he goes over the deep end and our protagonists find him wearing a bunny mask backwards on his head. Fuckin' great!

Though a sequel this film can easily be viewed on its own. I saw Syngenor first and never thought it was a sequel until I did a little research. After viewing the first film Scared to Death I can honestly say that Syngenor is a little better thanks to a higher budget and a little more fleshed out plot. The first film tried very hard to be scary (and failed) whereas Syngenor has more of a sense of fun to it. Fans of B-monster films are encouraged to at least give Syngenor a rent.

Bonus Rant (Spoiler): I found it odd that the plot device used to kill the Syngenor creatures is water. Water literally makes them explode. However this is a continuity error compared to the first film. The Syngenor in the original film took refuge in a sewer so it couldn't have been killed by water. I can't be too picky as Syngenor, though a sequel, actually acts more like a totally separate film which just happens to include Syngenors so I can't expect great continuity.