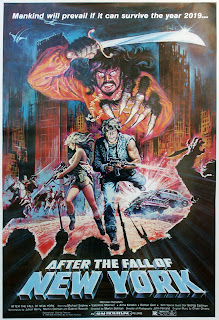 AKA: AFTER THE FALL OF NEW YORK

"I don't have time to jaw with anyone who won't identify themselves." Remember that line of dialogue if you run into "actor" Michael Sopkiw by chance as it is one of many memorable lines from this hilarious (unintentionally of course) Italian rip-off of Escape from New York. I actually first found out about this film when I was a freshman in high school because I was told this was released in some countries as an unofficial sequel to Escape From New York. Being a huge fan of that film I had to hunt out this Italian rip-off and low and behold I scored the original Vestron video as an ex-rental (I miss Vestron). The film threw me for a loop at first as it was a truly awful film... but upon second viewing I discovered the films grand entertainment value and over time 2019 has become one of my all-time biggest guilty pleasures.

Like I mentioned the film is a complete rip-off of John Carpenter's dystopian action flick and it opens with an awful model of a post nuke New York City (with a mutant playing a sax over the visuals!). An awkward narration starts up telling us that two warring nations had a nuclear war and that all women in the world have been rendered sterile. Then a long sequence begins with soldiers (wearing ridiculous outfits) killing mutants within the city wan guns that fire rounds with an AWFUL whining sound. This sound does become incredibly annoying after a while and each time I watch the film I always have the erg to quick draw the remote for the mute option. Soon we are introduced to our anti-hero Parsifal (what a name!) who wins a road warrior type demolition derby. He is then captured by military tycoons and flown to Alaska where he is given a do or die option to go into New York (sound familiar?) in order to find the last fertile female. Lots of action ensues as our hero and his sidekicks try to get her out alive.

Our "hero" really is a cheap clone of Snake Plissken without the patch. Michael Sopkiw may have only made four Italian B films but he's actually adequate in the role. The rest of the cast is very colorful for a B-film and all are unique. We get a one-eyed muscle guy, an ex-school teacher with mechanical arm, and even a midget, get this, named Shorty! There are all sorts of weird situations our heroes get into including coming across a village of midgets living in the sewers and even a group of de-evolved apelike humans. The action is decent even if it rip-offs other more popular action films. There's even a sequence at the end where our hero has to drive through a mined tunnel that completely rips-off the mined bridge sequence from Escape From New York.

To be honest there isn't anything good in this film but it all somehow comes together to make a fun time. The dialogue is embarrassingly awful yet at the same time very quotable. The worst part of the film however has to be the insanely bad model effects and everything from the worn torn city to flying spaceships look like they were taken directly out of an old Godzilla film. Even with all the awfulness the concept behind the film is actually quit good and I always thought the idea would actually make a good sequel to Escape From New York. Can you imagine Snake Plissken given another due or die mission to go back into New York after a nuclear holocaust to find the last fertile female? I sure can! Ironically the concept of this B film would be sort of reworked/ripped-off in the 2006 film Children of Men. Yes even "B" movie concepts can be "A" movie material!

Bonus Rant (Spoiler): At the end of the film our hero, his girlfriend and his muscle bound sidekick survived New York and are driving away while Parsifal confronts him for being a cyborg. The cyborg then goes nuts and kills his girlfriend. I understand Parsifal didn't like cyborgs but the damn thing helped him survive New York! Why confront and provoke it when it helped you! His girlfriend died of his own bullheadedness!