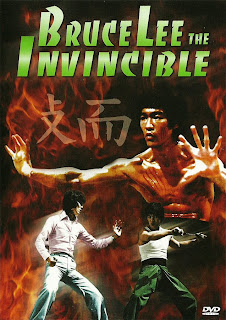 Our film opens with some jackass causing trouble at a martial arts school. To avoid getting his ass kicked by his martial arts teacher, the ass decides to move to Taiwan. While in Taiwan our ass decides to build a casino and in turns becomes a wealthy man. He starts using his money and martial arts skills to push people around. He even has the balls to screw one of his workers wife and when discovered beat the shit out of some of his employees! Sick of screwing married women he eyes the one beautiful single woman in the village. It just happens the women is the cousin to a young fighter is sent from China to spy on the ass. When the woman becomes kidnapped, he sends word to his master and he with his right hand man (Bruce Li!) travel to Taiwan to put the jackass back in his place.

The plot is simple but enjoyable enough for a B-Martial arts film. The villain is a great jackass (as you couldn't tell from my synopsis!) which helps the film out. The one big problem I have is Bruce Li really isn't our main hero. He's kind of the sidekick to our main hero which happens to be the teacher. A Bruceploitation film where our Bruce Lee clone isn't the main hero? That is odd but he still has plenty of screen time and kick ass fight sequences. He is even strong enough to crush two dice in his fist to show that they are loaded! This guy is badass!

This B-film also has plenty "WTF" moments that will sure to make a few of us fans of the genre to raise an eyebrow. Fist is our two cousin characters have an awkwardly close relationship. I'm not sure if the same laws apply to cousins in China as America but they might as well get a fucking room! There is also a fight sequence towards the end where our heroic team is jumped by a bunch of China men dressed like Native Americans and throwing spears. WTF indeed. The moment that takes the cake however is where both our heroes have to fight a gorillas that jump out of the forest. It's obviously a guy in a bad costume but I can't figure out if the filmmakers intended it to be a guys in costumes or "real" gorillas. Whatever their intentions were it still comes out as silly sequences that will have any martial arts lover going "what the fu...".

As Bruceploitation goes this isn't bad but it does lack the shamelessness and bad taste of other entries into the subgenre. It kept my attention and even made me chuckle on a few occasions. It definitely reinstated why Bruce Li is my favorite of the Bruce Lee clones.

Bonus Rant: Again the title has NOTHING to do with the movie and the DVD cover art even has the balls to show a picture of Bruce Lee from Enter the Dragon fooling many people that don't know the history of Bruce Lee into thinking that this is a genuine Lee film. HA! Not me... I can see through all that bullshit. Is it sad that I actually bought the film not for the fact of being fooled it was a Bruce Lee film but for the fact it stars one of his cheap clones? I think not. Bring on Bruce Li!