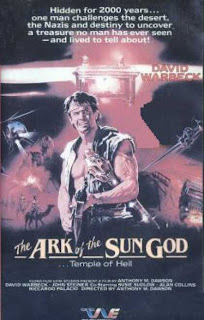 Welcome to another chapter of the lost Italian action "classics" of director Antonio Margheriti. This episode is for his second of three Indiana Jones rip-offs entitled The Ark of the Sun God. What's ironic is that there isn't even an ark in the damn movie! Also look at that old VHS cover artwork, it even has a what looks like the "ark of the covenant" at the top despite again NOT having an ark in the movie! We already know it's an Indiana Jones rip-off so they didn't have to make it look like it was more than it already was!

Like Margheriti's first rip-off Hunters of the Golden Cobra, we get another adventurer played by cult great David Warbeck. He's actually more of an thief expert here and is hired by a millionaire to locate a tomb in turkey (within a mountain shaped like a swastika no less!) in order to obtain a priceless scepter (not an ark!). While on his adventure he battles booby traps and other baddies also greedy to get their hands on the treasure.

Sadly I have not seen Hunters of the Golden Cobra so I cannot draw any connections but I have seen Margeriti's next film Jungle Raiders and I do have to say The Ark of the Sun God is better thanks to higher production values and a much more likable lead. There's something about Warbeck I like. He's almost like a little more serious version of Roger Moore (who is ironically mentioned in the movie). The action is in typical Marrgeriti cheesy fashion and there is plenty of it, trust me. Most of the action is takes on famous Indiana Jones sequences (an example is a rolling rock wheel as opposed to a giant bolder, snake pits, tarantulas and the likes). Sun God did beat Indiana Jones and the Last Crusade to the punch by having rats in a sewer attack our heroes. Indiana Jones ripping off an Indiana Jones rip-off... I like that!

Not surprisingly this rip-off has many flaws. The first major flaw is the car chases which are completely filmed with miniatures. I have never seen car chases before completely filmed this way and it came out cheap and sticking out like a sore thumb. The second is the Warbeck's girlfriend who offers nothing more than eye candy. She supplies no plot relevance and mostly stays in motel rooms and bedrooms throughout the film. The villains are also extremely poorly developed and only appear now and again to disrupt our hero from his goal.

Overall I found this to be a fun, cheesy rip-off adventure with a likable lead and some interesting, if awkward action sequences. Fans who only find pleasure in American cinema will no doubt find this a boring, cheap clone but Italian cult fanatics will definitely want to hunt this lost treasure down.

Sadly the only U.S. DVD release is from a shit company (Televista) and from what I have gathered from other cult fans the transfer looks like it was taken from a third generation VHS. People are better off hunting down the rare Italian DVD or just buying an old VHS. I give thanks to my friend Bill for scoring me a copy!

Bonus Rant: Our hero here has a liking for a very odd drink. His drink is milk with Bacardi mixed with crushed ice. What? People that I know that are bartenders have never heard of this drink and the thought of mixing anything milky with Bacardi makes my stomach curdle. This drink sounds like it could even make the likes of James Bond hurl! This curious drink was a nice try by our filmmakers to make our lead a little more quirky.

Written By Eric Reifschneider
Posted by Cronosmantas at 10:45 PM