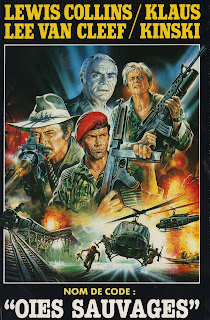 Feeling like an Italian 80's actionploiation film, I decided to blow the dust off of an old VHS to throw in my VCR. For an actionsploitation film what better director to pick from than the Italian B-action king himself Antonio Margheriti (aka Anthony M. Dawson by most of his English translated film credits). The film I picked was his lost Macaroni Combat classic Codename: WildGeese which I haven't seen for years. Now that I am a more seasoned Italian film fanatic it is due time to revisit this film just to see how entertaining a B-action film starring Lee Van Cleef, Ernest Bornine and Klaus Kinski can really be.

As easily seen in the title, this macaroni combat film is a complete rip-off of the popular British film The Wild Geese both in title and in story. We have the British elite mercenary group The Wild Geese getting hired by DEA agent Ernest Bornine to go into Thailand to burn two opium manufacturing plants. After the fist field is destroyed, their helicopter accidentally blows up so it our team hoofs on foot to the next manufacturing plant only to be double crossed by one of their own. Plenty of lovable Italian actionploitation sequences occur in the mean time.

The action sequences are pretty standard for the most part but they have that added Italian over-the-topness when it comes to blood and violence. What can I say, I had a hay day with it, especially the car chase sequence where our hero comes to a blockade in a tunnel and proceeds to drive on the side wall! The plot is not surprisingly predictable but Magaratti's interesting directing and the wonderful seasoned cast (though Cleef is somewhat wasted in his helicopter pilot role) mixed with some glorious Italian violence and cheesy 80's synth score made this B-movie well worth the time.

Is Codename: WildGeese a bad film? Sure it is but it's damn entertaining for the Euro trash crowd. There's something about a helicopter equipped with a flamethrower chasing Klaus Kinski that gets me cheering on the edge of my seat! It's just a damn shame that many of these 80's Italian action films haven't received DVD releases. Codename: WildeGeese definitely deserves one and I would kill to see this in glorious widescreen! I was actually surprised to learn that Codename: WildGeese was actually followed by two sequels: Commando Leopard and The Commando. Both of these sequels even have many of the same cast members return, except in different roles. I might have to put some effort in and hunt those sequels down in the near future...