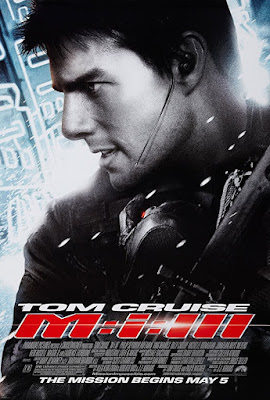 The first "Mission: Impossible" was almost too smart for its own good but lacked some of the action that the crowd desired. The second film sacrificed its intelligence for style and action. This third installment, cleverly called "Mission: Impossible III", needed to balance the two sides and give the fans an action filled but smart spy film. Luckily, with some strong writing, a fantastic cast, and the vision of quickly rising J.J. Abrams in the director's chair, this third film in the series does it. Admirably well, might I add.

Ethan Hunt (Cruise) is now semi-retired and lives a slower but more stable life training new IMF recruits. His personal life is back on track and his engagement to his new boo (Monaghan) seems to be shaping up nicely. But when his protege in the agency (Russell) is taken hostage while investigating black market criminal mastermind Davian (Hoffman), he has to go back into the field with a new team (Luther (Rhames) returns silly, its not all new) to find her. Soon Hunt finds himself deep in a world of double agents and going head to head with a villain as well equipped and as deadly as he has ever faced. Out smarted, out gunned, and out played Hunt has to dig himself out and save not only himself, but his love too.

J.J. Abrams and his cohorts (writers Kurtzman and Orci) have crafted up a smart and intelligent script that mirrors what made the first one so damn fun to watch and partnered it with an action filled ride full of insane shoot outs and crazy action. "Mission: Impossible III" is the best of what could have been made from the series. Its smart and fast paced story builds on our characters nicely, adds some new elements in (like getting to see how IMF actually works), and just slicks the entire thing over with gloss and adrenaline. This film will have you guessing the entire time and on the edge of your seat. It also has one of the best highway action scenes ever crafted.

Of course, Cruise returns as Hunt, this time reflecting on the smart guy that rarely showed himself in "II" and his supporting cast is magnificent. The film is truly stolen though by new baddie Davian (Hoffman) whom finally fills the void that has plagued this series - a memorable villain. A tight supporting cast builds the rest nicely and this film is packed with memorable characters and performances.

"Mission: Impossible III" is just a slick and chic action spy film if there ever was one. It resurrects the somewhat dead franchise very nicely and starts it off in some new directions (of which rumors of a fourth film have been heating up nicely lately) and gives us one of the best action films of the 00s. Even the over the top moments don't seem so cheesy in this version. That says something.

Written By Matt Reifschneider
Posted by DarkReif at 12:56 AM