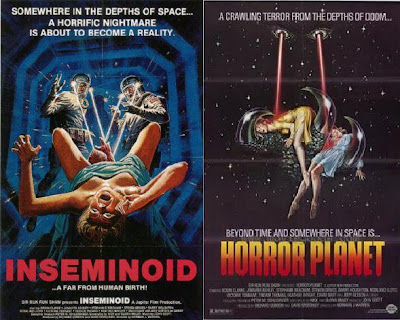 Roger Corman jumped on the Alien band-wagon and so did the Italians. So naturally it's the Brits turn to make their own chapter in the trashy Alien rip-off subgenre! Roger Corman's efforts, though bad, were at least trashy fun. Unlike those previous films mentioned, Inseminoid makes one fatal mistake.... it's not trashy fun and thus is just a insipid copy cat.

Our film has a British space station on a remote planet and with the crew exploring some ancient caverns. An explosion occurs injuring some crew members. While recovering one of crew members goes nuts and runs out into the caverns with some people on his tail to stop him. While in the caves one of our women astronauts gets raped by an alien creature (in very bizarre sequence). While pregnant with some monster babies, she starts going insane and killing off the crew one by one.

Though it sounds like it could be a schlocky good time, it sadly isn't. The director and cast take this lame film seriously and the production values are laughable (I love the how the train in the cavern looks more like a children's ride!). Director Norman J. Warren loads the film with some blood and gore but it doesn't counterbalance the rest of the badness. The whole film is just boring and uninteresting with forgettable characters and a director going through the motions to get a paycheck.

Inseminoid was also released in the United States as Horror Planet but no matter what title you call it, it doesn't hide the fact that it's complete crap. It may not be the worst Alien rip-off ever made but it's definitely lower tear rip-off material. It's a damn shame as the director made a few interesting little horror films in the 70's with Satan's Slave and Terror but he didn't bring that visual flare to Inseminoid. It's just another forgettable film that will guarantee to disappoint fans of even trashy rip-off material.

Bonus Rant: Not that I like Alien rape sequences or anything, but why the hell is the alien's private part a "glass tube". I highly doubt any lifeform in the universe has body parts made out of GLASS. The short scene could have easily been left out.