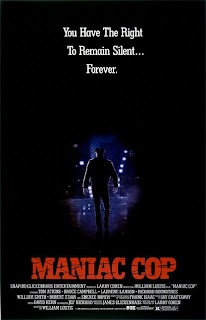 Have You ever heard of an action slasher? No? Well me neither until I laid my eyes upon this badass film as Maniac Cop is every bit as much of an action film as it is a slasher horror film. Since I am a action and horror connoisseur, this is a cult film buffs dream come true!

Our film has some violent killings going on in New York city and few witness to the crimes say it was a cop. People even start becoming scared of the law enforcement and in one memorable scene a women blows a cop away as he was coming up to her vehicle to issue a speeding ticket. Genre great Tom Atkins is assigned to the case and he connects the murders to what seems to be dead cop Matt Cordell. Cordell was wrongly imprisoned and killed by the very criminals he put behind bars. He seems to be out for revenge but is he really alive or a walking corpse? Cops Bruce Campbell and Laurene Landon are also on the case as it seems Cordell is setting up Campbell to take the fall.

So how the hell is this both an action and slasher film? Well for one thing the action sequences are major badass and the stunts are jaw dropping. There's a sequence towards the end where they flip a police paddy wagon into a bay with a guy hanging onto the side! The film is also a slasher as it has plenty of suspenseful stalking moments not to mention a villain that is so fucking memorable that he could even hold his ground with the likes of Jason Voorhees. Rober Z'Dar's mammoth chin is something to haunt nightmares with!

Not only do we get a badass action sequences and a memorable villain, we also get a great cast filled with veterans and cult actors. I'm talking about Richard "Shaft" Roundtree, William "Conan's Father" Smith, Bruce "Evil Dead" Campbell, Laurene "Hundra" Landon and of course Tom Atkins, one of my favorite cult movie stars that deserves much more respect than he gets.

So we have baddass action sequence, a memorable villain, a great cast... what else could be good? The fucking directing that's what and William Lustig proves to me yet again why he is one of my favorite B movie directors. He has the ability to take B-movie scripts and low budgets and make the movies look like they were filmed for 10 times the money. Wonderful camera shots and pacing keeps the movie trucking right along. I almost forgot to mention the extremely catchy whistling score provided by Jay Chattaway, who is mostly known for providing ultra cheesy scores to cornball action films for the Cannon group.

Maniac Cop not only is my personal favorite William Lustig film, it's also one of my all time favorite B-movies. Every time I watch the damn thing something impresses me. A slasher film about a psychotic cop doesn't have the right to be this good yet it is. Why this film isn't more widely talked about in the horror world is beyond me.