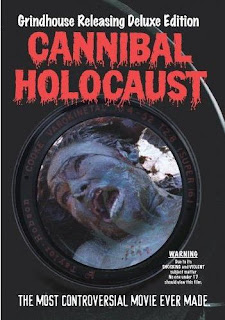 I use to steer clear of the Italian cannibal genre years ago for the fact that it sounded like this subgenre went a little too far in order to be "shocking." I read about real animal killings and such on film and that just gave me the impression that all the entries would be just trash. However curiosity got the best of me when I read an article about the most controversial movies ever made and Cannibal Holocaust made the list. The article stated that the director was brought up on charges from the Italian government because the deaths in the film looked so realistic that people really thought the actors were actually killed on camera. Of course they weren't but I knew this film had to be hard core. I had to see this film that was so controversial. Oh boy does the film live up to its reputation! This is definitely not a film for the meek or faint of heart as this film doesn't just raise the bar on what is acceptable in cinema, got goes over it. To my surprise I not only got a film that lived up to its shocking reputation, but also a well made movie that has plenty of underlying meanings. Yes, Cannibal Holocaust is a SMART film.

The film is basically broke up into two parts. The film opens with a professor hired to find a missing group of filmmakers that went deep into the South American jungles to film a documentary on a tribe. While looking our professor finds canisters of the film the film-makers shot not far from their skeletal remains. The professor takes the film back to New York were him and a group of colleges view the film to see the fate of the group. This is where the second part of the movie begins as the rest of the movie is shot documentary style and we get to view the horrors the group instilled upon the tribes and in turn the horrors the tribes instilled upon them.

The smartest thing about this film is the two faced nature of this filmmaking group. At first we the audience is supposed to sympathize with them and how horrible the tribes were for killing them. As their film starts we are shown that they are typically nice people. As the film progresses though we find that our filmmakers let their temptations win them over and they begin to beat, rape and torture tribes members. They start burning their villages and killing their livestock. The absolute most memorable sequence which will be burned into anyone's mind is the aftermath of a rape. One of our "loveable" male crew members rapes a women (with his girlfriend trying to drag him off!) and her tribe in turn impales her on a pole as basically she was made "dirty". When the member that raped her sees this, he at first starts laughing until the cameraman says something to the extent of "hey stop that, we're filming" where his expression suddenly turns to horror for the camera. This begs the question of who really are the bad guys? Civilized humans or barbarian cannibal tribes? By the end of the film the audience really feels no pity for the horrors this filmmaking crew goes through.

The directing? All I can say as is Ruggero Deodato's direction is perfect for a dreary film like this. It's gritty yet balanced with beautiful cinematography. The wonderful score is slow and melodic counterbalancing the awful, shocking imagery appearing before our eyes. The acting by really novices is realistic adding to the natural feel of the film. However if the film does have one flaw it has to be the onscreen real animal killings. Yes they add to the realistic nature of the film but it did push the film over into the "bad taste" category for a few moments. It did please me that all the animals that were killed on screen (including a giant sea turtle) were actually eaten by the tribes but the principle behind it still doesn't sit well with me.

The Italian cannibal subgenre as a whole sucks as most of the films are complete garbage and sadly Cannibal Holocaust gets lumped with the rest. This my friend is NOT just another cannibal film. What The Good, the Bad and the Ugly is to spaghetti westerns, Cannibal Holocaust is to this subgenre. The directing style, acting and everything is tops and most importantly it makes you think. Sadly the film will never get the respect it deserves due to its graphic nature. Just because a film is graphic doesn't mean it's not good. Hey, who said art had to be beautiful? This is a striking, smart, and powerful film that will stay with you for the rest of your life. I do recommend people go into this picture cautiously as it will be too much for most. Just remember, it's only a movie, it's only a movie, it's only....