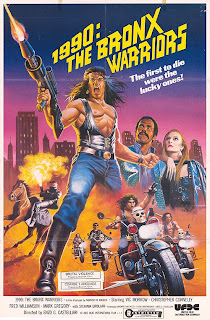 
Talk about dating your film fast by making it only take place 8 years in the future compared to the year the film was made and slapping that year in the title! Any who what we have here is a full fledged B-film from once grand director Enzo G. Castellari. Like all once great directors from Italy's golden age in the 60's and 70's, Enzo has now been reduced to making complete B-grade drivel when the 80's came rolling around. Is it non-watchable drivel? Oh hell no as I enjoy these early 80's Italian action and science fiction trash but it's still bad none-the-less.

Apparently in the year 1990 (as if you couldn't get that from the title!) the Bronx has been declared a "no man's land" and gangs are left to roam free without any following any laws or no worry of police interference. A young woman who is the daughter of the president of the "Manhattan Corporation" escapes into the Bronx since she disagrees with her father's views. Almost being killed by a roller skating gang, she gets saved by "The Riders" who is lead by a guy named "Trash". Her father in the mean time hires a mercenary called "Hammer" (Vic Morrow) to go into the Bronx to get her back.

1990: The Bronx Warriors is like a bastard combination of The Warriors and Escape From New York as all the gangs in the Bronx have their own themes. I'm talking about a roller skating gang, a biker gang, a black gang, and even a tap dancing gang. A tap dancing gang? That's a real stretch there Enzo! Hell there is even a gang with painted faces and clubs reminiscent of the baseball gang in The Warriors.

The definite highlights of the film are the real life Bronx locations which really add to the filthy backdrop to the film and of course the plethora of action sequences. The secondary characters also a hoot with some big name actors mixed with the usual Enzo stock players. Where else can you see Fred "The Hammer" Williamson, George Eastman, Christopher Connelly and Vic Morrow in the same film? This is a Italian trash lover's dream cast!

The most atrocious aspect of the film is the casting of Mark Gregory as our lead hero Trash. What the hell was Enzo thinking? This guy is a little too feminine for me to take seriously as a "bad ass leader of a biker gang." He even walks like he is gliding across water has a stick up his ass! Not only is he too FEMININE, he also can't act worth a shit and when he starts making "deep" speeches about "death" it makes me want to stick a fork in my ear.

Despite the films rather silly premises Enzo surprisingly takes this material seriously giving us plenty of unintentional laughs. Poetic lines like "Your gray matter is in your ass" will make anyone with a B-movie funny bone hit the floor laughing. Thank god for some great B-movie vets in supporting roles to make up for our lackluster gang leader. Perhaps he would have been better casted in a film about hair dressing? For a B-Italian film I found it entertaining enough but it is a far cry from Enzo's grand spaghetti western and poliziotteschi entries. Followed by "Escape From the Bronx".