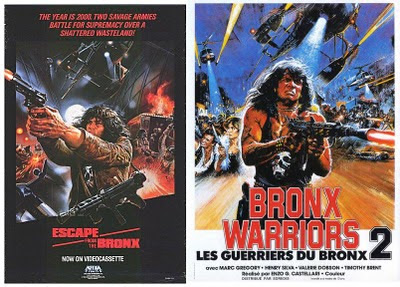 ESCAPE FROM THE BRONX


Despite 1990: The Bronx Warriors being a bad film, I still enjoyed it for what it was. What can I say? I enjoy a majority of the trashy films that came out of Italy in the 80's. After rewatching Bronx Warriors again I really got the inkling to watch its sequel though for some damn reason it has never gotten a North American DVD release. Come on Shriek Show! Get off your lazy asses! I actually went to eBay to purchase an old VHS when I surprisingly came across an Australian import of the disc released by Stomp Visual that is oddly enough NTSC Region 0. Yes, that's right my friends, there is a NTSC release of this "classic" sequel and after watching this lovable trash again I still can't believe it hasn't been released in the U.S.!

Escape From the Bronx takes place 10 years after the first Bronx Warriors film (thank god they didn't add the year to the title of this film!) and the Manhattan Corporation has decided to relocate all the gangs in the Bronx to New Mexico. This is of course what the seedy corporation tells people publicly but secretly they are sending in "Disinfestant Squads" (lead by genre great Henry Silva) to burn out and kill everyone who lives with in the walls of the seedy borough. Our gangs of course don't take too kindly to this so they retreat underground, all but our "hero" Trash who returns from our previous film. Trash is pissed, especially since the squads killed his parents (I assume it's his parents as they had a HUGE picture of Trash sprawled out on one of their walls). Trash, with the help of a reporter and a mercenary, make it a mission to kidnap the president of the Manhattan Corporation. Lots, and lots of violence is the result.

What I love about this film is director Enzo G. Castellari seems to be having a ball making it. He surprisingly took the original film seriously but here he decides to just have fun making a B-grade film and he loads the film with outrageous action sequences. I actually lost count at all the slow motion, violent shots and hits to people's heads there were! Our heroes even have the ability to miraculously blow up any vehicle by shooting at it from no less than a football field away! Our hero Trash even blows up a helicopter with a six shooter! Is the some of the action implausible? You bet but it sure adds to the furious fast pace of the film!

Our hero Trash is also a bit more believable here. Mark Gregory just came off a little too feminine for me to accept as a bad-ass biker gang leader but he's definitely gotten better with a few films under his belt. At least he seems to be able to walk and run like a man in this film! There is even a piece of a dialogue where guy goes "Look how he runs! He's a fag!" Is this a little nod to how he moved in the first film? If it is then I applaud Enzo for including that little in-joke! I also was really digging the new villain played by Henry Silva. This guy is so bad ass that he is introduced with the line "Fuck Headquarters! We do it my way!" Okay, okay Silva... settle down buddy! In my humble opinion he made a much more interesting and threatening villain than Vic Morrow's somewhat forgettable mercenary in Bronx Warriors.

If I had to make one complaint it is the lack of interesting secondary characters. Everyone cool in the last film was killed off (sniffle, sniffle Fred Williamson) so there isn't much here. Trash is no longer a leader of a gang so he's more of a loner so there is no interesting gang members under him. Strike, the mercenary that helps Trash, does pick up some of the slack plus fans of Italian trash will recognize him from Enzo's The New Barbarians.

Though this is technically a worse film than 1990: The Bronx Warriors, I however enjoyed it more and found it more memorable. Mark Gregory is more "tough" as our lead anti-hero and the action is much more furious and fast paced. Mix a that with a director having a sense of fun with the over-the-top material and your guaranteed to have a great time! Now some company needs to get off their ass to provide this film to fans in America! If you can't wait then there is a link below to the Australian Region 0 / NTSC DVD that I have.

Written By Eric Reifschneider
Posted by Cronosmantas at 9:02 PM