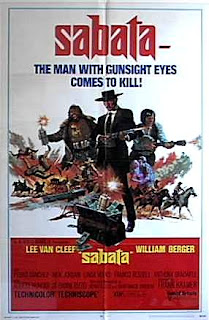 Do you think you could mix a James Bond film and a Spaghetti Western? No? Well I beg to differ as if James Bond and a spaghetti western shagged, the love-child from the encounter would no doubt be named Sabata.

Sabata stars Lee Van Cleef in our title role and his character is a cool, collected, devious son of a bitch. A likable SOB kind of like...well James Bond, only with a western anti-hero mold to the character. Sabata is a gunslinger who bounty hunts for money with his incredibly accurate shots. He comes to a small town and with the help of an old partner named Banjo (William Berger) he is able to get back some of their stolen loot. After more detective work, Sabata discovers corruption heading all the way up to the mayor of the town and with the help of Banjo and some other goofy sidekicks, he is able to take the corruption head on.

Like I mentioned before this is a James Bond film in spaghetti western form. The James Bond films were at the peak of their popularity when Sabata was made so it is no surprise their formula finally seeped over into the Italian western market. Lots of connections can be drawn between the Bond and Sabata. Both are well dressed, confident, great at gambling, popular with the ladies and extremely good at what they do. Though the plot isn't necessarily a espionage thriller, there are still plenty of Bond moments. Our character Sabata has colleges that are friends at one instance then an enemies at another. Much like 007's "double agent" friends. Sabata even uses very Bond-like gadgets like a four barreled pistol that also shoots from the handle. The showdown with the villain at the climax is also very James Bond in fashion, not to mention the excellent catchy Sabata score.

Like Bond films, Sabata is also very light-hearted when it comes to characters, plot and action sequences. This may come to a shock to people expecting a serious, hard hitting western from the likes of Leone. There are plenty of goofy action sequences that might leave some spaghetti western fans scratching their heads. Many of the scenes involve an Italian heavily make-upped to look like a Native American using trampolines to jump large walls and such. Yes it's overly silly but one can forgive for the light-hearted nature of the film.

Overall I found Sabata thoroughly enjoyable. Perhaps it was because I was in the mood for a somewhat silly spaghetti western but it's tone and feel was a welcome tone shift in the genre. I dug the James Bond influence but be warned, if you despise James Bond films then no doubt you will come out of Sabata wanting to view a Leone film as a chaser to wash Sabata down with.

The film proved very successful and two sequels would follow in America but only one true sequel followed in Italy. Director Frank Kramer's (aka Gianfranco Parolini) next film Indio Black starring Yul Brenner would be released as Adios, Sabata in America. The one true follow-up with Lee Van Cleef returning would be Return of Sabata.

I should also note that it was brought to my attention some time ago that the MGM DVD release has an audio sync problem. I never noticed it the first time and rewatching the film I still notice no problem. If it is out-of-sync it must only be by a hair otherwise it just seems like typical Italian dubbing to me.