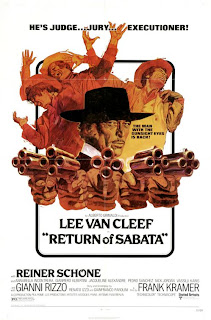 Despite being the third Sabata film in America, Return of Sabata is technically the only true sequel to the original with our lovable ass anti-hero being played again by the god-like Lee Van Cleef after that impostor Yul Brenner took over the role in Audios Sabata. Since this is the "true" sequel (not another film retitled to be a "sequel" like Adios) we again get a spaghetti western/James Bond film hybrid, the way a Sabata film should be!

Apparently Sabata has joined the circus as the film opens with him being a marksman in a traveling entertainment group. Of course Sabata would degrade himself to a career of abashment as he is actually following a counterfeit ring. He tracks the ring to a small western town where he teams up with some oddball sidekicks to blackmail an old war buddy into getting money from the mayor of the town who has an elaborate scheme to steal residents money through taxes in exchange for counterfeit money.

Like James Bond films the plot is basically the same as the film before, but like typical sequels this one just isn't as good. It's great to see Lee Van Cleef back in the roll but the rest of the characters seem like less interesting carbon copies of similar characters in the original. Reiner Schöne as Lee Van Cleef's old war buddy isn't as interesting as the devious Banjo despite the two characters again having a love/hate relationship. Similar to Leone's Man With No Name trilogy, there are a lot of actors that return playing different characters her so that might confuse some viewers. Ignazio Spalla returns again playing a similar role but he's rather worthless spending most of the film banging on a large drum. Fans will also recognize the actor playing the unconvincing Native American in Sabata returning playing a different character that again does ridiculous jumping acts.

Bonus Rant: The theme song desperately tries hard to be as catchy as the first films theme but I found it in bad taste that one of the lyrics calls Sabata the "nine fingered man." Yes Lee Van Cleef is missing part of a finger on one of his hands but why include a lyrics in the song focusing on one of his flaws? If I were him I would be offended...

Written By Eric Reifschneider
Posted by Cronosmantas at 8:52 PM