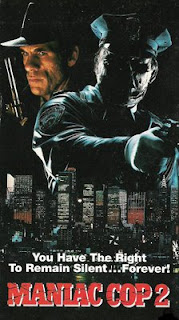 You knew it would happen. How could a film surprisingly as good as Maniac Cop not deserve a sequel. Thankfully both director William Lustig and writer Larry Cohen both return so we can expect the quality of this sequel to be close to the original. Well I can calm your doubts as Maniac Cop 2 matches the original in being a badass action slasher film... just with a few more flaws.

Our survivors of the original Bruce Campbell and Laurene Landon are currently seeing a psychologist about their story of a "dead cop reeking revenge." Of course our killer cop returns, surviving his tumble into the harbor and quickly disposes of Bruce with his trusty knife in his billy club (Evil Dead fans' hearts are breaking everywhere!). Cordell then sets his sights on Landon and manages to kill her but not without our psychologist character (Claudia Christian, the babe from The Hidden) witnessing the occurrence. Now she, with the help of hard-nosed cop Robert Davi (a character no doubt filling in for the absence of Tom Atkins) try to stop Cordell as he is teaming up with a serial stripper killer.

The action is on par with the first film and in typical Lustig fashion the stunts are absolutely AMAZING especially for the budget. The highlighted stunt has to be a car speeding out of control with a person handcuffed to the wheel while OUTSIDE of the vehicle! There is another amazing action sequence when Cordell enters a police station all Terminator-like and literally blows the living hell out of everyone. He even throws a cop threw what seems to be like 10 walls!

Like the first film the cast is also tops for a B movie. Hardcore Bruce Campbell fans will no doubt be upset that he bites it within the first 10 minutes but the rest of the cast is a nice ensemble. I really dug Robert Davi's burnt out cop character and he was a nice companion piece to the Frank McCrae cop character played by Tom Atkins in the original.

The problem I have with this sequel is, no disrespect to Larry Cohen, is some of the plot devices. Why is Cordell teaming up with a serial killer? Somehow it all ties into clearing his name but I just didn't find it to gel well. The mysteriousness of the Cordell character is also lacking here as he is just a full on tougher than hell zombie. The original played with the aspect that he may be alive or dead but not here. He's just a zombie.

Overall this is a badass sequel to the original. Lustig again puts all he can into the film to make it look like it had 10 times the budget it did and the film looks wonderful as a result. Perhaps with a script that made more sense on the purpose of Cordell's mission would this sequel have been as good as the original. As is though this is a sequel that is highly worth checking out and in my humble opinion one of the top sequels the horror genre has to offer.