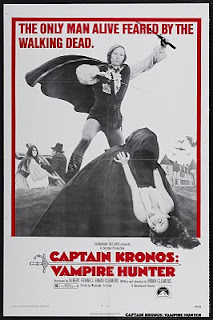 The early 70's was a rocky time for Hammer studios. A new breed of horror film with the likes of The Exorcist and The Texas Chainsaw Massacre made the companies output seem as old as the periods they take place in. Fans were expecting contemporary horror with added violence and graphic visuals and Hammer just didn't have a nitch in this market. Not surprisingly Captain Kronos tanked at the box office and this is just a damn shame as Captain Kronos is one of Hammer's most overlooked gems in their large catalog.

Like the title says, Captain Kronos is a vampire hunter. He and his humble sidekick roam the British countryside slaying vampires wherever they might come up. Young girls in a small village are coming under attack by a hooded figure who drains them of their youth. Kronos and his sidekick track down the original to an ancient family that has ties to the dreaded Karnstein family. Hammer aficionados will recognize that name as that is the family name in the Karnstein trilogy (which includes the films The Vampire Lovers, Lust for a Vampire, and Twins of Evil) so if you want to get technical Captain Kronos could be considered a spin-off from that interesting trilogy. I love little connections like that in films and I thank the filmmakers for writing that in.

The film, typical with hammer productions, has a beautiful look to it with nice direction, wonderful costume design, and solid acting. A kickass score just tops it off. Sadly there are a few flaws which keep this from becoming one of Hammer's all time great films. Captain Kronos for the most part is a rather poorly developed character. Not much is know of him other than some quick dialogue about how he returned back from the war only to have his sister attack and bite him as she was turned into a vampire (anyone else thinks this sounds familiar to Blade?). I wish his character was a little more fleshed out. Along his journey Kronos picks up a gypsy girl and she really has no plot relevance other than eye candy. Our Karnstein family here is also not as threatening as I would have liked them to be. The family is just wishy washy and I never felt that Kronos was in real danger. I also found it to be in poor taste to have Kronos's side kick to be a hunchback. Really? How much more cliché can we get guys? Why not call him Igor for Christ sake!

Despite its flaws Captain Kronos comes out being a highly entertaining Hammer film and it just saddens me that none of the planned sequels ever got made. Perhaps some of the sequels would have delved more into the back story of the character. We might have even got a team-up with Hammer's other grand vampire slayer Van Helsing. Hey, a Hammer fan can dream can't he?! The film has an ever growing cult audience and I highly recommend fans of this old fashioned-type of horror to seek it out.

Written By Eric Reifschneider
Posted by Cronosmantas at 8:29 PM