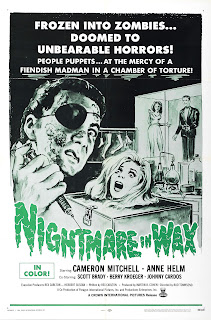 Ever since the release of Mystery of the Wax Museum in 1933 and it's more popular remake House of Wax starring Vincent Price in 1953, wax museums have had a solidified place in horror cinema. However it would be only a matter of time until a film came around to tarnish that creepy setting and that film would finally come in 1969 with Nightmare in Wax, the cancerous grown of all the wax museum horror films that came before it.

Out plot has a madman running a Hollywood based wax museum attraction, only he uses live people as his "wax" creations. It seems years ago our wax artist was engaged to a beautiful actress but her manager wasn't too thrilled and in a fit of rage throws a full class of wine into our artists face while he is smoking a cigarette, setting him ablaze! This sequence is unintentionally hilarious! He survives, scarred up and wearing a patch wreaking revenge on the Hollywood types.

This is truly Z grade material and everything about this film is bottom line, except for our wax artist played by genre great Cameron Mitchell. His presence is the ONLY thing that makes this film actually watchable, shitty makeup and all. The rest is just hogwash with bad acting, novice directing, and absolutely the dumbest cops ever to disgrace a horror film. Perhaps the dumbest aspect of the film is that our wax artist doesn't kill people and then preserve their corpses as wax figures, he instead injects them with some sort of serum in that paralyzes them. He then posses them ALIVE in his wax museum. This is where the ridiculous plot element kicks in as the serum gives out when the victims are exposed to electricity. Cue in the electrical storm and predictably we have our wax figures rise up to take revenge on their "artist."

Fans of Z-grand material will enjoy and I will admit it kept my attention but that doesn't hide the fact this is a very poorly made film. The reputation of the wax museum being a respectable horror setting was tarnished until the release of Waxwork in 1988 brought it back to its former glory... that is until that fucking second House of Wax remake infected theaters in 2005!