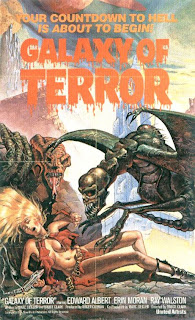 When it comes to trashy Alien rip-offs, there is one film that is the leader of the pack. That film is Roger Corman's seemingly lost classic Galaxy of Terror. Though absolutely "inspired" by Alien, Galaxy of Terror however isn't a complete rip-off like other films in the notorious subgenre like Creature, Forbidden World and Inseminoid. Sure there are some monsters lurking in the dark after our astronauts but there is plenty of psychological horror in addition to the basic stalking monster moments. The best way I can compare it is Alien meets Event Horizon... just trashier.

Our film opens like a complete Alien rip-off with a crew landing on a remote planet to investigate a cash landing. While there they discover an ancient pyramid where each crew member comes face to face with various monsters and die horrible, bloody deaths.

What I liked about this ultra cheap sci fi horror is the addition of the psychological horror aspect. It seems the Pyramid brings the crew members deepest darkest fears to life. This aspect itself makes this film a severed arm above the rest in the notorious "Alien" knock-off subgenre. The film is also full of amazing, practical special effects. Everything from matte paintings, creature effects to visual effects are all tops and brings out a real nostalgia feeling from this reviewer as I grew up with effects of this nature. I'm sorry but computer generated effects will never top practical effects in my book! The colorful cast of actors also makes this film a fun romp to watch. Where else can you see Edward Albert, Sid Haig, pre-Freddy Robert Englund, and Ray Walston in the same movie! Guaranteed nowhere else in the galaxy!

Even with all the praise the film succumbs to many B-movie flaws that seem to always plague Roger Corman productions. The first is the AWFUL dialogue. Sid Haig admitted the dialogue was so dreadful that he convinced to Roger allow his character to be mute. Still his crystal throwing badass was still required to say the laugh educing line "I live and die... FOR THE CRYSTALS!!!" That line gets me every time! The film also gets a little overly complicated and self-important towards the end and it becomes unintentionally funny with all its metaphysical mumbo jumbo.

People who have seen this film before are no doubt going "when are going to talk about the maggot rape!" Yes Galaxy of Terror has a grisly reputation as it has a sequence where a maggot grows to giant size and literally rapes one of our woman astronauts. This sequence is pure crass exploitation and sadly it's what the film is most remembered for. My parents went to see Galaxy of Terror in theaters when it first came out and they walked out during this sequence. This was one of two movies that my parents walked out of (the other being William Friedkin's Cruising) so I definitely had to hunt down the film that went over the acceptable edge for my parents. Viewing it now I can see why!

Galaxy of Terror deserves no more than 2 stars but I decided to bump it up a half a stare due to the fact a lot of hard work and effort went into making this film which really had no money to spend. Lots of blood sweat and tears were shed for this production and the film looks great as a result. If it just had better dialogue and a tighter script could it have become an "A" of a "B" movie. However can a film with a maggot rape scene be respectable even with better dialogue and script?

Bonus Rant: It just fucking irks me when people hear about this movie and all they can talk about is James "my way" Cameron. Yes James Cameron was production designer and second unit director on this film and yes he would go on to be an Oscar winner later but that doesn't mean he alone made this film! There is even a whole section of the documentary present on the DVD dedicated to him....grrrr