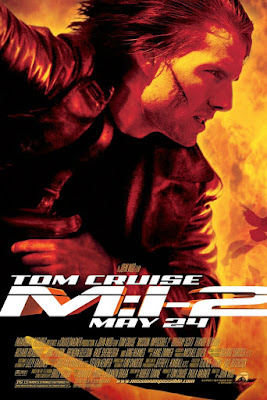 With the success of "Mission: Impossible" it was pretty easy to tell that Paramount was smelling their own Bond franchise in the air. So it wasn't all that surprising that a sequel for the franchise would be more focused on the action sequences and creation/deeping of our hero Ethan Hunt. Thus, we have "Mission: Impossible II" or "M:I-2" for those of you edgy enough to shorten a title to letters and numbers as was popular in the late 90s and early 00s. This time it's focused on the action and over-the-top ridiculously epic story line instead of the smarts and spy elements that the first one maximized and jammed into its script. Oh... and it has Tom Cruise back but this time with grungy long anti-hero hair. Cause 00s, people.


Ethan Hunt (Cruise) is called back from vacation (if rock climbing in the desert with no sort protective gear is called vacation) to find and retrieve a stolen virus and antidote from a rogue IMF agent. He has to build a new team (he brings back his hacker pal from the first film, Luther (Rhames) for good measure) and find the virus and take on an old rival in this rogue agent. He also falls in love with a thief (Newton) that he's recruiting, but that's just added on for good measure too.

For a film that clocks in over two hours the plot for "Mission: Impossible II" is shockingly thin despite its many many details and many many plot twists. Its a good idea to suspend your belief in most things logical and realistic going into this film cause its going to to suspend them for you if you don't. Its ridiculous, over the top, world domination kind of drivel that you might expect from a Bond film, just completely Americanized. The script, with its many loopholes and faux character work, is the biggest flaw for this film and it hinders it a lot.

Luckily, since the story is a large sack of rubbish, we have a very stylistic director in John Woo and some amazing action sequences that basically carry this film. The last half hour of this film is stunningly fun and intense with lots of explosions and a wonderful paced motorcycle chase. Do suspend those realistic tendencies though as these sequences are quite unbelievable too. How Woo is able to make those sequences so damn impressive over the years is still impressive to me and it's his ability to embrace the over the top take on the film that works out many of the kinks that would have drowned the film otherwise. Thanks Woo for making an otherwise crappy film watchable even if the style has to inherently crush the substance to do so.

"Mission: Impossible II" may not have been the spy film one might expect after watching the first one, but its still a fun and action filled film watch. It definitely needs more to it (like a memorable villain for one) but take it with a grain of salt and just go with it.

BONUS RANT: There is a screen swipe at the beginning of the film that irritates the shit out of me. A woman in a red dress twirls in front of the camera and it swipes it to the next scene, but its completely out of place and off setting because it doesn't fit with the camera work or style of the scene. It irritates me every time I watch this film.

Written By Matt Reifschneider
Posted by DarkReif at 8:04 PM