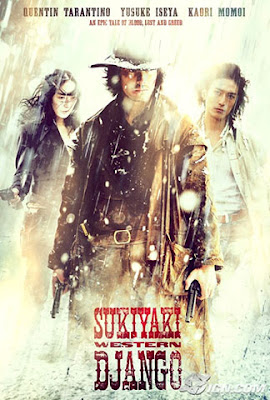 Director: Takashi Miike
Notable Cast: Hideaki Ito, Koichi Sato, Yusuke Iseya, Masanobu Ando, Takaaki Ishibashi, Shun Oguri, Masato Sakai, Yoshino Kimura, Teruyuki Kagawa
The idea that the iconic cult film director Takashi Miike would take on two cult genres, spaghetti westerns and chanbara films, and then combine them into one wild film is a vulgar auteur's wet dream. This is because only a director as insane and creatively loose as Miike would be able to navigate those torrential waters and make the film not only work, but he makes it incredibly effective. Thus, we arrive on the intensely charismatic and stylish Sukiyaki Western Django, which combines our two beloved genres into a modern cinematic masterpiece of revenge, gunfights, lost love, samurai swords, and, of course, dusters with cigarettes.

Our unnamed wanderer (Hideaki Ito) has found a place that he might be able to pass a little time. Sometime long, long ago in Nevada, our gunman stumbled into a town with a legend of a lost treasure of gold. In classic cinema fashion, there are two clans in this town playing territory games to find the lost gold. The White clan lead by a sword-wielding samurai warrior with serious blade skills and the Red clan lead by a dimwitted and practically indestructible man who calls himself Henry are at a standstill. This lone gunman looks to play his thin odds as he helps out a distressed prostitute in the town seek her own revenge against both sides. It's war and only the most dangerous killers will survive.

Sukiyaki Western Django, as one could probably tell initially, is an oddly woven combination of homages to its genres that never seems to lose sight of its own identity throughout. It wears its influences of Yojimbo and Django squarely on its sleeve but it never fails to become a slave to either, combining elements of both into its own modern take into a tapestry of fun over the top storytelling. Narratively speaking, if one is familiar with both chanbara films or Italian westerns, it's a mostly straightforward walk down a familiar trail, done with a loving understanding of why the tropes of both genres are inherently linked in history and why they are now universally known.

From its painted backdrops in the opening sequence to its odd visual style of action that loves to play with long silences and intense moments of gunplay amongst and colorful set designs, Miike's take on the genres is one that fits right up his alley. The over the top style visually with its balance of long tension-filled shots, quick-witted and intense action sequences, and the occasional odd special effect (like how the White clan leader can split a bullet with his sword in mid-shot) is something that might split its audience. One either gets Miike's odd humor and ballsy artistic choices or they don't. If you don't then you will find yourself feeling like an outsider for the entirety of the film. If you do, then revel in his use of colors, odd narrative time jumps in structuring, and the sheer absurdity of concept. It's the style of the film that highlights everything.

It must also be mentioned that the acting in this film is lovably over the top and charming. Its something that many critics have debated and bawked over, with our Japanese cast that stumbles through their English dialogue and characters that defy reality in a Looney Tunes manner. The sheriff in the film does die many, many times in remarkably dark and comedic ways and the rest of the cast seem to be almost scarily painted in stereotypes from the genres represented. For me, it only uplifts the oddity of this film experience to new levels that make it even more like 'an old wives tale' about the west and the east. It's a highly enjoyable ride with each of the characters through a different world where motives are simple and time affects little.

Sukiyaki Western Django is a balls-out thrill ride of visual intensity that should have cult film fans clamoring for more. It's a perfect homage to its genres and forefathers of the two styles all the while retaining its own post-modern vision through the lens of a directorial maniac. Miike has struck gold with this lone gunman tale. If you are a fan of either genre (or in our case, both) then this is a must-see and must have. 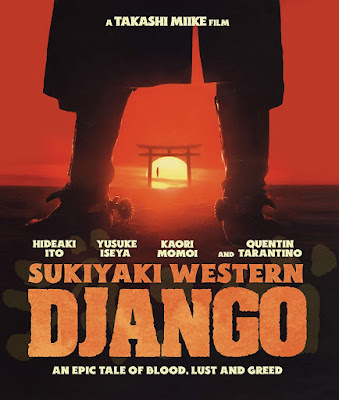 MVD MARQUEE COLLECTION BLU RAY UPDATE:
Earlier this year, the cult collectors label MVD Marquee released a new Blu Ray edition of Sukiyaki Western Django and it's a must-have upgrade to the film. While the quality of the film has not changed in the 10+ years since it's birth into the cinematic world, anyone that owned the original US release will want to pick this one up for their collection.
The review included above for the film, written over ten years ago for the site, remains intact, but it's notable that this latest release contains the extended cut of the film which features 23 minutes of additional footage to the film. The new extended cut of the film is just as impressive as the theatrically released version and fans will definitely want to leap into the new material. The pacing is definitely different and it's understandable why there were cuts to keep up the manic energy of the film, but it works. There are even entirely new subplots in this version. To which one is a superior cut is more or less a question of preference, as the extended cut feels even more like Miike is injecting a wild edge into the film, but ultimately the two are comparable cuts.
Beyond that, the MVD collectors edition features all of the material from the previous Blu Ray release like deleted scenes, a making-of behind the scenes, and trailers. For fans who like to display their films, the slipcover and reversible artwork are a nice touch. For a film that I already adore, this latest release of Sukiyaki Western Django is a must-have for the collection and it gets only the highest of recommendations.