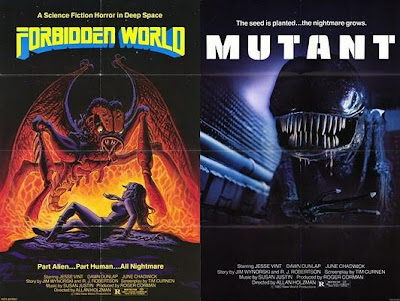 I went into Forbidden World (also released theatrically as Mutant) expecting a entertainingly bad Alien rip-off and boy oh boy did I get what I expected! Sometimes said to be a sequel to the cult film Galaxy of Terror but I don't see the connection. Forbidden World is just another quickie Alien rip-off produced by Roger Corman that just happens to use some of the same sets as Galaxy of Terror. To be honest Forbidden world is FAR more of an alien rip-off than its earlier more popular counterpart.

The film throws the audience right away into a space battle getting everyone interested. We have unused stock footage from the Corman Star Wars rip-off Battle Beyond the Stars giving the film some nifty space effects. On the ship we are introduced to our "hero" and his android sidekick. Our bounty hunter is called to a planet to investigate a lab where one of its creations has broken free and killing all the lab animals. Once arriving the creature has already cocooned itself into a corner and emerges, turning various crew members into gelatinous creatures themselves that it can eat. By the end our creature becomes a bad carbon copy of our Alien design (see the "Mutant" poster for a visual representation) and trust me you will be rooting for the damn thing to eat our unlikeable characters!

The women on this scientific research base take the cake as being the strangest characters. I mean they are complete sluts! With what only seems to be a few hours after arriving, one of our gals beds our bounty hunter! The next morning our bounty hunter walks into the steam room and our other lady friend almost lays him right there, until our escaped Alien/mutant decides to fuck that up. Our gals also walk around the station in skin tight outfits and "robes" that barely cover their ass cheeks. In perhaps the most unintentionally hilarious moment our gals have an important talk about how to communicate with the mutant alien by soaping each other up in the shower! The director didn't even try to hide his attempts at exploitation! I did get a good laugh when one of the women tries to communicate with the "thing" via 1982 computer and the Alien mistakes the word "co-exist" into being that she wants to be eaten.

Forbidden World is a BAD Alien rip-off but unlike many other BAD Alien rip-offs (cough cough Star Crystal!) Forbidden World manages to entertain by being schlocky fun. The characters are one dimensional, the acting is bad, and so is the script. Yet all this badness mixed with 80's new wave still kept me glued to the screen. I am embarrassed to say but I actually had a good time with Forbidden World. It's got enough unintentional laughs, gory special effects, and gratuitous nudity to please fans of trash cinema. Corman himself would even produce a shit remake of this film in 1991 entitled Dead Space.

BONUS RANT: The original cut of the film contained 5 extra minutes of comedic material that apparently angered Roger Corman who believed comedy doesn't belong in a "horror" film. He had the material quickly removed before wide release. Thankfully Shout Factory also released the director's cut on DVD with this cut footage intact and it gives the film more of a tongue-in-cheek feel which I dug for a bad Alien rip-off. Shame on you Corman for cutting that material out!

Written By Eric Reifschneider
Posted by Cronosmantas at 4:38 PM