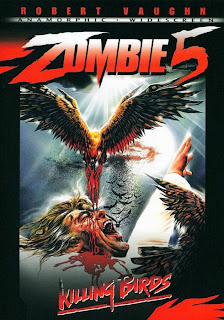 First off I will say this is NOT a film that is part of the Italian "Zombie" franchise. It was originally released in the United States as "Killing Birds" and the film on the film itself portrays this title. Shriek Show/Media Blasters Entertainment slapped the title "Zombie 5" on the box art to fool people into thinking this is a fifth entry into the series so they would sell more copies. Zombi 3 and "4" were both released in 1988 but Killing Birds was released in 1987...uh that doesn't make sense. Very deceptive indeed. What's next? Is Black Demons going to have the title Suspiria 2: Black Demons scrawled on the box!

Now with that out of the way, let's review the Killing Birds movie itself. Killing Birds was made when the Italian horror market was starting to die off. Many of the genre's worst films were released in this time period of the late 80's and the really early 90's. The genre greats like Lucio Fulci and Dario Argento were showing signs of decline. Even with all the other bad Italian films released during this period, Killing Birds comes out as being one of the worst. This film by Joe D'Amato was filmed in the United States with American Actors so it isn't dubbed like most Italian efforts. The movie however does start off promising as it has a Vietnam vet returning home only to find his wife and lover in bed together. He murders them and her parents that happen to pull up during the incident. While cleaning up the mess in the family Avery, the killer gets his eyes gouged out by one of the family birds. Other than poor gore effects, the scene was done well and the sequence is very Italian. Right after that moment the film takes a huge nosedive as it introduces us to a handful of college students (who can't act) on a campus that apparently are majoring in some "bird" like degree. They get a grant to go find some rare bird which happens to reside near the house where the first four murders took place. They run into a blind Robert Vaughn who is wearing some dreadful prosthetic makeup over his eyes. I have always liked Robert Vaughn as he can usually make bad B-Movies bearable. Sadly he isn't able to here and his character is severely underused. While in the house, the students begin to encounter weird happenings and suddenly two stiff zombies appear. The zombies (who always appear with a very fake "White Light" behind them) come out every so often to kill off the students one by one. Towards the end when only two students remain, Vaughn appears again saying "It's me they want".

A lot of Italian films sacrifice cohesion of story for style but they are still great. Killing Birds however is very incoherent with no style. Who are these two zombies? Are they two of the people who were killed in the beginning? If so, why are they killing off students that had nothing to do with their murder? Are they vengeful spirits like in "The Grudge" who kill everyone who enters the house? Who knows as nothing is ever explained. Even the title "Killing Birds" is deceptive. That title and the rather cool cover art make you think this is going to be an Italian variation of Alfred Hitchcock's "The Birds", which it is not. The beginning has the murderer get his eyes gouged out by a bird, but he wasn't killed. The ending (Spoiler Alert) has a badly matted shot of birds flying in the air applied over a shot of a house and with a scream we can safely assume the birds killed Robert Vaughn's character (END Spoiler Alert). Ok...these Killer (not killing) birds killed one person! And again, what is the connection between the birds and the zombies? grrrr....this film is just so mind numbing! Yes it's bad but is it so bad it's good? Frankly no. Sometimes these Italian films are so bad they are hilarious. Zombi 3 and After Death (aka "Zombi 4") are so bad they are funny and entertaining as hell, but Killing Birds is not.