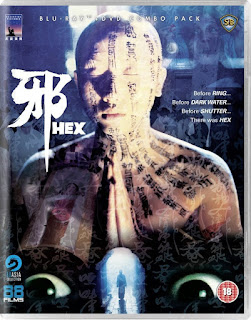 As a martial arts cinema fan, I’ve mostly dedicated my time to digging into many of the films from the Shaw Brothers catalog, but martial arts epics are not the only films that the iconic studio made. They also dabbled in a handful of other genres including exploitation, thrillers, and horror. For the most part, I’ve always stuck with the martial arts films, but with the recent release of Hex on Blu Ray via 88 Films in the UK I decided it was high time that I dig much further into what these Shaw Brothers horror films have to offer. Hex is one of those films that feels like a tale of two movies. The first half is one film and the second half another. Occasionally this style can work, or at least be entertaining in certain cases, but for Hex it just feels disjointed and uneven. The film is fun, while not nearly bat shit insane as some of the other Hong Kong horror films of the era, but it’s hardly a film that uses its better aspects in ways to maximize the narrative. Even fans of Shaw Brothers horror may find it slightly disappointing.

Chan Sau-ying (Tanny Tien Ni) is sick and tired of her alcoholic and abusive husband. Not only that but she also has a lung infection that will not heal. One or the other will be the death of her. When a new servant (Chen Szu-chia) arrives at their home, the two women begin to conspire against the husband to have him killed to free themselves. However, things are not always what they seem and death is not always the end of the horrors of domestic violence.

In many ways, Hex can be described as the Hong Kong horror version of the classic French film Diabolique and if you’ve seen that film then you will get the jist of what this one has to offer. Granted, it’s not nearly as well executed or effective, but you’ll get the main ideas on hand. Hex starts off by really building on a grounded thriller style horror film with the use of domestic violence and the plotting against a drunken, belligerent husband as its foundation. As the film plays out, this is easily one of the better parts of the film. It didn’t feel like the fantastical over-the-top style that usually comes with Hong Kong horror and it was somewhat refreshing in its restrained efforts. Tanny Tien Ni, Wang Jung, and Chen Szu-chia work the chemistry of the leading actor triangle well and director Kuei Chih-hung really builds up the horrific circumstances of having this monster that lives in your house with performances and the rather claustrophobic use of the house and the weird foggy swamp of a pond outside of it. When the two women finally build up the courage to fight back, it’s effective and the audience is invested. We care and that says a lot when it comes to a horror film.

This happens at about the half way point to the film and this is where things deviate from the established style. Hex then switches main protagonists at this point from the wife to the abusive husband and it starts layering in a ton of ghost elements as he is haunted by his wrong doings. The second half is ignited by a strong and early twist, which is where the initial shift of tone happens, but the film struggles the more it plays out. Since the audience has already learned to hate the husband, making him a protagonist is a bold maneuver, but it’s one that don’t work nearly as well as it might have. By the finale, the audience is still invested in his demise and it works against much of what was working so well in the first half. This, of course, is layered into a series of ghostly encounters that increase exponentially in their outrageousness until the final couple of scenes – where the film makers must have realized they were obligated to make this film exploitative and decide to throw in one of the most “unique” exorcism sequences I have ever seen. The only thing that’s weirder than this exorcism piece is the completely out of left field explanation of the events of the movie that comes after that. No, it’s not one of those cop out moments, but it certainly is a twist that truly changes how the audience looks at the entire film. It might be nonsensical and out of nowhere, but damn if it isn’t a weirdly ambitious way to end the film.

If anything, Hex is entertaining in how it tells its story by throwing in so many different tones, style shifts, and intriguing twists into what was essentially a straight forward horror thriller. It has a lot of fun pieces, including the use of the water as a symbolic piece throughout the film, and it has some decent performances to power through many of the rough patches of its writing. Even then though, this is a film that is going to appeal only to a certain niche of horror fans (or Shaw Brothers fans) that will appreciate the oddities it has to offer. Go in with a grain of salt and the right expectations about this tale of two films and Hex will entertain, even with its significant flaws.