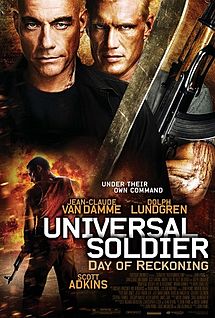 The "Universal Soldier" franchise is perhaps one of the most fucked up franchises out there. Although it seemingly looks to be cohesive on paper (outside of having two made for TV films that no one remembers or acknowledges), the consistency between films is utter insanity. That goes for this latest entry "Day Of Reckoning". Whether you consider it the sixth entry or the fourth, it really doesn't matter because at this point you might as well just throw everything you know, outside of the first film, out the window. However, that doesn't stop this entry from being the franchise's best sequel, even if it's a mind fuck entry into the series.

John (Adkins) has been through hell. The last thing he remembers is his wife and young daughter being ruthlessly slaughtered by a group of men invading his home. When he awakes from his coma (with memory loss in tow), he is told that his family was killed by Luc Deveraux (Van Damme) a rogue militant man. What John discovers upon returning home is a series of clues that seem to be leading him towards a final confrontation with this man...and a mystery that keeps getting stranger and stranger.

If Stanley Kubrick mashed together "Memento" and "Universal Soldier: Regeneration", the end product still wouldn't be as strange and brutal as "Day Of Reckoning." I've used the term arthouse action before to mostly describe unique films of the genre, but this one takes it to a whole new level. When John Hyams took the franchise back in a more serious and brutal direction with "Regeneration", it reinvigorated it. Made it modern, gritty, and borderline depressing. Now he takes it even a step further, applying an almost film noir atmosphere to it, cranking the brutality and grit to maximum, and then letting the viewer try to do their best with making it make sense.

On its own, the film is grating. Hyams uses some odd techniques to give the film a disorienting feeling like a ton of strobe light effects, minimal dialogue, and a ton of twists where the film does little to indicate to the audience where it's going. To this end, it's damn effective. I was completely engrossed with John's journey (played to rather impressive effect by a subtle Scott Adkins) and found myself verbally stating "what the fuck" at some of its more ridiculous turn of events. "Day Of Reckoning" does little to build back story for the series or why Luc Deveraux and Andrew Scott (both reoccuring roles) are where they are now since the last film and in ways it was frustrating. That frustration however only came after I finished the film since I was so intent on seeing this mystery unfold on screen.

To be honest, I wasn't expecting such an artistic deviation for the franchise. When a film with the "Universal Solider" tag features Jean-Claude Van Damme, Dolph Lundgren, Scott Adkins, and Andrei Arlovski with John Hyams directing...I'm going for the action. Sure as hell, "Day Of Reckoning" doesn't disappoint on this end. While the film really does build an atmosphere of mystery for its first half occasionally punctuating this with some very gritty fight sequences, it's the last half that owns it's action label. Starting with a car chase (that feels more like a gladiator battle than true chase) and a face off in a sporting goods store where Scott Adkins punches a bowling ball into dust, the film kicks into high gear. It makes random twists in plot, but seemingly always chalks up a solid, and very violent, action sequence to fit in. By the time the finale comes around - featuring Adkins fighting Lundgren and Van Damme - the bar was raised so high only the most intense fighting would be acceptable...and it goes there. Oh yes, it goes there.

"Universal Solider: Day Of Reckoning" is not for everyone. In fact, it may not even be for fans of the franchise since it deviates so drastically from the style and feel of the previous entries. On the other hand, I felt it was a more dangerous and ballsy product that kicks it to being the most intense and strongest film of the franchise thus far. It has enough thick atmosphere and artistic merit to be unique, yet slays with its brutal and brilliant fight work. "Day Of Reckoning" might not be the "Universal Solider" we know, but that doesn't deter the film from being a fantastic viewing experience.

This is the kind of film that really needs to be seen to be judged. So you might as well pick up your copy at the links below.