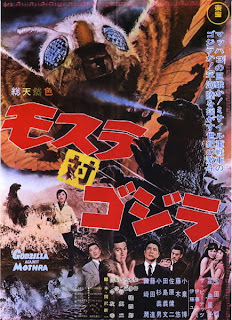 
“King Kong vs. Godzilla” proved to be a monster success at the box office stomping and demolishing all the competition so Toho knew that monster battles were the future of the “Godzilla” franchise. Toho spent a pretty penny licensing the character of King Kong from an American studio so they decided to keep Godzilla’s next foe in-house and what better enemy than the title character from their 1961 hit “Mothra”. Could a giant, divine Moth prove to be a respectable opponent for the ‘king of monsters’? That would be a BIG hell yes as the combination resulted in one of the strongest sequels into the entire “Godzilla” franchise.

A typhoon wefts Mothra’s egg from her island home and it washes up on a beach in Japan where a money grubbing capitalistic pig “buys” the egg in order to make a gigantic profit. Mothra’s twin fairies (again played by ‘the peanuts’), whom Mothra has a symbiotic relationship with (this weird plot device is explained in “Mothra” so make sure to watch that film first), appear warning the humans to give the egg back but they refuse thus Mothra soon appears angry as hell. In the meantime Godzilla reappears (rising from the ground in one of most bizarre appearances) and soon it becomes a fight to the finish.

Despite enjoying the original “Mothra” I was still questionable if the character would make a good fight for Godzilla. The only powers Mothra truly has is the ability to flap her wings causing massive winds of destruction. My doubt was subdued as Mothra kicks Godzilla’s ass by hilariously dragging his it around by his tail. When Mothra’s offspring arrive, they also outwit the enormous reptile by spitting webbing all over his ass. The filmmakers quelled any doubt by making this an immensely entertaining fight for the masses

Godzilla, despite being a clumsy bastard when he first arrives by getting his tail stuck and tripping into buildings, has never been so badass. The filmmakers go to great lengths to show his indestructibility here. The helpless humans try everything in the book to stop his ass, including a barrage of tanks, planes, nets, ships and even electricity but nothing seems to stop him. It’s a shame that the image of Godzilla would get watered down later on in the franchise.

If people didn’t think Toho couldn’t out due their monster mash in “King Kong vs. Godzilla” then they need to think again. They outdid themselves here making an immensely entertaining monster melee that is even better than the entry that came before. The child in any viewer with a soft spot for giant monsters should lap this entry into the “Godzilla” franchise wholeheartedly as the franchise was at the peak of its enjoyability. “Mothra vs. Godzilla” would be confusingly retitled “Godzilla vs. The Thing” in America as distributors didn’t think enough American movie-goers knew who the character “Mothra” was…. I think they were dropped too many times on their head as a baby.

Godzilla would return in “Ghodorah, the Three-Headed Monster”