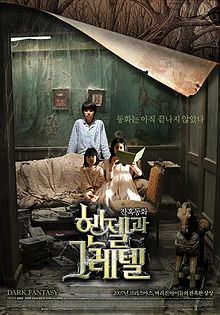 After I discovered the existence of this film on accident via the internet, I have been waiting and waiting for this film to be released in the US. It had generally received critical acclaim, yet the elusive film remained only available in bootleg format. That is until I check Netflix Streaming a few weeks ago and voila! There it was, like it was some sort of destined event. It was my chance to finally see "Hansel And Gretel." Even though it's hard to say that this film is anything like a traditional horror film, the creativity and strong sense of style that the film presents make it a very unique viewing experience and one that definitely left its mark.

Lee Eun-soo (Jeong-myeong Cheon) is a young salesman whose lack of responsibility in his life has led him on a careening path of bad choices. When a car wreck leaves him wounded in the middle of a large forest, he is rescued by Young-hee (Eun-kyung Shim) the daughter of a family living in the woods. This seemingly too nice and pleasant family take him in to make sure he is feeling better. The two parents and their three children are almost too perfect. Things seem mysteriously off kilter. When the parents suddenly vanish over night, Lee Eun-soo is left to care for three increasingly volatile children...and a forest that won't let him leave.

"Hansel And Gretel" is not a retelling of the classic tale. That would have been too easy. What makes this Korean horror/thriller so intriguing was how it uses the themes and beats of the original children's story as a basis for an entirely new fantasy (and often disturbing) story. This is not the story of children over coming a witch. This is a story of a man seeking redemption and responsibility in the face of fantasy like elements brought on by this "world of imagination" created from the minds of those looking for love. It's a fantastic twist that really makes itself a very unique film experience, with particular nod to Yim Pil-sung's stunning visual style and odd mixture of black humor, horror, and fantasy.

At first, I thought the film was going to be a rather predictable one. I'll try not to give too much of the film's twists away here, but the beats of the film seem to be in a rather predictable formula. The film's "villains" are easy to spot in the first act, despite attempts at various red herrings, and from there the general character growth of our protagonist with the children seems to be pretty by the numbers. It doesn't make it any less effective here. The mysteries of how he will escape and who is the antagonist of the film are easily eclipsed by the eternal question of "why" and it makes "Hansel And Gretel" a fascinating watch. It's the odd depth to the writing and story progressions that made this film such an off beat success to me.

"Hansel And Gretel" also benefits from very strong execution. Although one does have to step back and keep that benefit of the doubt in their mind, the film has such a strong visual presence in how it tells the story that my pause at the ridiculousness of it all seemed far away from the front of my thoughts. The acting was superb, in particular from our protagonist and the children, and even the more broad stroke folk (like the deacon and his wife) flow right into the film and never feel that out of place.

This Korean spin on the themes of the children's story is definitely a unique and off beat film. It's often a bit cliche, but strong executions and a plot that engulfs the viewer minimize the damage created from some of its formulaic pandering. I was very curious to see Yim Pil-sung's critically acclaimed foray into horror (more so since I saw his work on "Doomsday Book") and "Hansel And Gretel" did not disappoint. Although the film is still waiting for a 'legit' US release, one should do a trial of Netflix Streaming to catch this film before it's taken down.