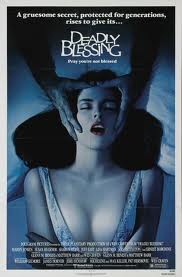 
In what many call Wes Craven’s ‘lost’ film, “Deadly Blessing” is a curious entry into his filmography as it was a transitionary period between his early brutally primal horror films “The Last House on the Left” and the “The Hills Have Eyes” to his later more supernatural mainstream efforts like “A Nightmare on Elm Street” and “The Serpent and the Rainbow”. The result comes across seriously flawed yet not without beings oddly intriguing and should easily satisfy fans ‘craven’-ing some early 80s terror. 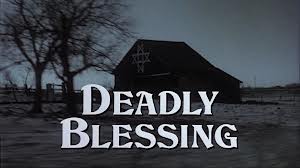 The film opens with a young couple expecting their first child having problems with the Amish-like religious cult living next to their property. The husband ends up dead in a questionable accident and two of our lovely young ladies gorgeous friends make a trek out to the county to cheer their BFF up. Someone doesn’t take kindly to the new neighbors and bodies begin to pile up. 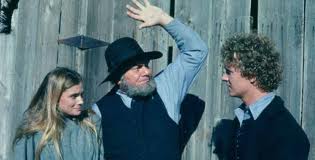 Compared to Craven’s earlier efforts it’s easy to see he worked his way up the Hollywood ladder as “Deadly Blessing” is much more professional looking – including dolly camera moves and actual cinematography. This also marked Craven’s first time working with professional actors, most notably Ernest Borgnine who gives the film some serious presence as the psychotic religious cult leader (not far removed from his hammy performance in “The Devil’s Rain, just on the other side of the cross). Also notable in the cast is an early role for beauty Sharon Stone who was rumored to have had an affair with Craven’s then wife and caused a bitter divorce in the process. What’s a Craven film without a few familiar faces and good ‘ol Michael Berryman, poster boy for “The Hills Have Eyes” has a large role as one of the religious members to appease fans of Craven's earlier film.
Craven plays around with some intriguing ‘nightmarish’ sequences that were sure to later inspire scenes in his popular “Nightmare on Elm Street”, including similar bath tub sequence that substitutes a snake for Freddy’s claw. Lots of creepy imagery of spiders definitely got my skin to crawl (I hate those eight legged freaks!) especially a memorable nightmare scene where a spider actually drops into Sharon Stone’s mouth! AWWWW! I bet Craven wished it were a poisonous spider if the rumors around Stone and his ex-wife are true. 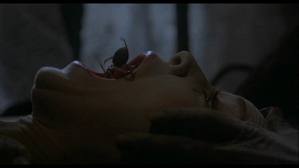 The plot however has a tendency to become convoluted, especially with all the twists towards the end and the “WTF” ending (which I dug but at the same time doesn’t make a whole lot of sense). One can tell Craven was a director-for-hire as his heart doesn’t seem to be totally into the story but he did give the film some nice atmosphere and memorable nightmarish sequences to make this easily worth digging up for fans of the horror genre. Unavailable for many years and only released on VHS eons ago, Shout Factory’s sub-label Scream Factory unleashes this lost Craven effort on Blu-ray and DVD for fans to lay their hands on. Click on the link below to purchase.