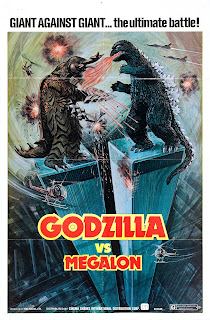 
I won’t hold back by stating this is one of the worst entries in the “Godzilla” franchise (damn I feel like I’m saying that a lot lately). It’s definitely no better and perhaps a hair worse than the previous film “Godzilla vs. Gigan” by making many of the same mistakes and some new ones, including my biggest pet peeve… which you guessed it… is FUCKING STOCK FOOTAGE!

An underground race of humans are upset about nuclear testing fucking up their kingdom so they unleash their own monster Megalon to beat the shit out of Japan. Godzilla, still being the full-fledged superhero of the human race he has been degraded to, isn’t happy about it so he teams up with a silly robot named Jet Jagar to stomp his bug ass… but wait, Megalon gets help from Gigan!

The new monster, Megalon, is rather lame. It’s just an embarrassing looking beetle with drills for hands. No wonder they had to bring back Gigan (who seems shoehorned in) to up the ante a bit. The replay of how Megalon spits bombs out its mouth is just rather sad. However Megalon is not as lame as Godzilla’s new ally… Jet Jagar. Slick looking super robots were all the rage in Japan at the time so Toho shamelessly jumped on that bandwagon by introducing a robot that has the amazing ability to fly and grow to 400’ tall in an instant. This cornball character is just so absurd that it has become a cult favorite among many fans, including its ear bleeding end credits song.

Much like “Godzilla vs. Gigan” Toho utilized plenty of stock footage to save some cash and it’s just as haphazardly spliced in. Scenes of Gigan’s hook from the previous film are easily seen when Megalon destroying aircraft. The worst is stock footage of Godzilla; by this time Godzilla finally got a new suit (thankfully as it was falling apart in the last film) and stock footage of him is of the old suit which has a completely different snout. I seriously was embarrassed for Toho while watching this! Much like the flying scene in “Godzilla vs. Hedorah” the filmmakers have Godzilla do an absolute ludicrous stunt of sliding on his tail to drop kick Megalon… not once, but twice.

Bonus Rant: Though made in 1973, “Godzilla vs. Megalon” was deemed so bad that it didn’t even get a U.S. release until 1977 and as false advertising the poster artwork was made to mimic 1976 remake of “King Kong” with our two monsters fighting on the world trade center. I remember as a kid loving the artwork but being sorely disappointed that no sequence in the film took place in New York on the world trade centers. Gotta love those distributors and their tricks to get asses in the seats…

Godzilla will return in "Godzilla vs. Mechagodzilla"