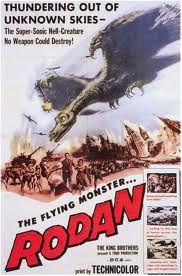 In an attempt to out-due their gigantic cinematic hit “Godzilla”, Toho studios decided to try something a little different with their new movie monster. First off all this new Kaiju can fly and second it was going to be filmed in glorious color. Still even with the ability to fly a supersonic speeds and the addition of being filmed in color (sadly not in widescreen; that wouldn’t happen until their 1961 film “Mothra”), “Rodan” still fails to eclipse it’s earlier reptilian brethren but is still a monstrously fun ‘guy in a rubber suit’ film on its own. 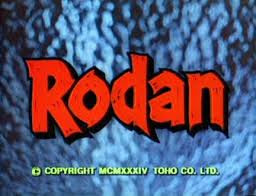 Some miners start mysteriously dying when they accidently break open a prehistoric cavern. Soon some bug-eyed insects make their presence known and in an attempt to whip them out, an even worse foe is stumbled upon when a pre-historic egg in the cavern hatches to reveal Rodan. Before long Rodan starts wrecking the town of Tokyo with hurricane level winds provided by his 500 foot wing-span. Whatever shall the Japs do? 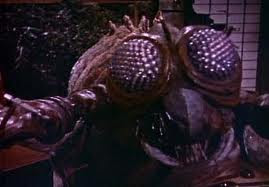 What’s rather atypical with “Rodan”, for its betterment or detriment I’m not quite sure, is that it feels like two films in one. It starts off like a typical monster in a mine killing workers horror film and halfway through it shifts gears and becomes a giant monster flick with two ancient dinosaurs (yes there are 2 Rodans, why ‘2’ it’s never explained) threatening to destroy Tokyo… and later the world! This split in the plot is unique and allows for some surprises later in the film but at the same time it might disappoint some viewers who expect a giant monster stomping on model cities from the get go. 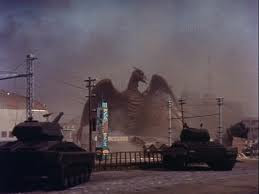 “Rodan” fails to eclipse Toho’s earlier film “Godzilla” but that doesn’t mean it’s a failure. On the contrary “Rodan” was a huge success and though it was never followed by a direct sequel, the flying dinosaur character would return in numerous entries in the “Godzilla” franchise. Hey, “Rodan” can’t beat “Godzilla”, he might as well join him and proved to be an amusing adversary and occasional ally. It may not have the big green guy but for fans of the “Kaiju” giant monster film, “Rodan” is a must and a classic of the genre.