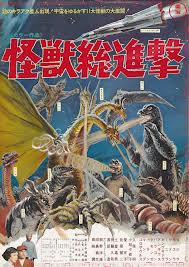 
After two subpar entries into the franchise, Toho decided to end the “Godzilla” franchise and what better way than bring back the guy who created the whole phenomenon to begin with. So director Ishiro Honda returns and he and Toho decide to go all out for what was going to be the final “Godzilla” film by loading the movie to the brim with nearly every monster that had been featured in the “Toho Universe” thus far. The concept of huge monster brawl makes this entry extremely popular among fans but like I assumed the saying too many cooks in the kitchen applies to the final results.

The film takes place in the future year of 1999 and all the world’s monsters are peacefully living on ‘monster island’. All goes well until some evil aliens (imagine that in a Toho film) decide they want to take over the world so they take control and unleash all he monsters onto unsuspecting cities. Whatever will the Japs do?

The plot is very derivative of the alien invasion device previously seen in the entry “Invasion of Astro-Monster” so fans will have serious case of deje vu. The whole concept of having a huge monster brawl is fun but I’m sad to say there are TOO many monsters in the mix. So many in fact that they clog up the film with many of the lesser monsters regulated to small cameos. Of the monsters in the “Toho Universe” to show up are of course the heavy-weights Godzilla, Mothra, Rodan and Ghidorah but also lesser known monsters like Manda (from “Atragon”), Baragon (from “Frankenstein Conquers the World”), Varan (from “Varan the Unbelievable”), and Kumonga (the giant spider from “Son of Godzilla”). I almost forgot but Godzilla’s Pillsbury dough boy son “Manilla” also makes an unwanted appearance.

Even with Ishiro Honda back at the helm the production still suffers from the lower budgets Toho had regulated their films to. The suits and model cities are all subpar compared to the earlier entries into the franchise and are only a step above the previous two lesser sequels (Godzilla vs. the Sea Monster” and “Son of Godzilla”). Perhaps if there were a few less monsters more of the budget could have been dispersed to improve the remaining effects.

I’m sure I won’t win any awards among the fans but I found “Destroy All Monsters” to be just a tad overrated. Don’t get me wrong as I enjoy it as a campy “Godzilla” film but the plot is too derivative of past, better sequels not to mention the lower tier special effects. The ending monster brawl was still a lot of fun, even if the fight was a little unfair due to King Ghidorah having no allies and having to face ALL the monsters. Though “Destroy All Monsters” was to be the final entry into the series all know it wasn’t as it proved to be too profitable to let Big G die off and more sequels were soon to follow.

Godzilla will return in "All Monsters Attack"