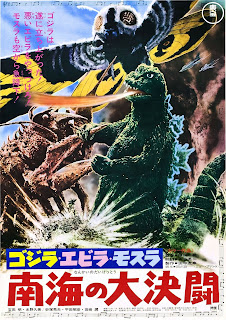 GODZILLA VS. THE SEA MONSTER

Aka "Ebirah, Horror of the Deep"


Toho started feeling the pinch in the late 60s as they were starting to get clobbered by competition emitting from television stations. It’s hard for us to realize today but television series really hit the film market hard in the 60s as the quality of shows started to skyrocket and people where staying home instead of venturing out to theaters for their entertainment. As a result the budgets for their films fell and the first of the “Godzilla” franchise to feel the pinch was “Godzilla vs. the Sea Monster” and the pinch left a bruise, a deep purple puss filed bruise that was sure to scar the franchise forever.

We open with a young man and a group of guys that sail out to sea in order to find his lost brother. He takes this as fact because a psychic declares he lives! Their ship instead gets sunk by a giant lobster and they wash ashore on a island that terrorists are using to manufacture nuclear weapons. Unable to escape do to the giant arthropod scuttling off shore, they are lucky enough to find Godzilla sleeping in cave and they wake his ass up by, get this, attracting a lightning bolt to a sword! Big G then wakes up to save the day. 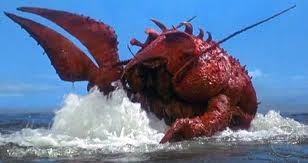 Fans may get a “King Kong” vibe from the plot and they should as this was originally intended to be a vehicle for the giant ape, whom Toho still retained the rights for after making “King Kong vs. Godzilla”. Though Toho did give Kong his own film with “King Kong Escapes”, Toho decided to replace Kong with Godzilla as he as a more marketable name at the time. This explains why Godzilla gets awoke by electricity (a plot device for Kong as seen in “King Kong vs. Godzilla”), likes to throw boulders and even gets infatuated by the beauty of a local girl which are all King Kong plot staples.

The lower budget also reared its ugly head as this time Toho decided to have the entire film take place on an island, which would become the setting for multiple sequels to come. This insured the budget would be kept low as they wouldn’t spend all this time and money on creating miniature model cities for Godzilla to stomp on. Also out was director Ishirô Honda and in comes Jun Fukuda, director of many of the lesser entries to come. With Fukuda the series even degenerates more into making Godzilla a “superhero” as opposed to a menace of death and destruction and even starts to pander the character more to children, which would hit full force with the next entry.

Any way you look at it “Godzilla vs. the Sea Monster” is a disappointment. Godzilla doesn’t show up until an hour into the film and he even has his worst fight ever with a giant condor, so poorly filmed the audience can’t tell what the fuck is going on. The budget constraints show up everywhere from the plot, setting and costume design and to top it off it doesn’t even feel like a Godzilla movie as it was originally written for King Kong. I also forgot to mention Mothra has a completely thankless cameo. “Godzilla vs. the Sea Monster is good for a few laughs but only for the most die-hard and forgiving fans of Big G.

Godzilla will return in "Son of Godzilla"