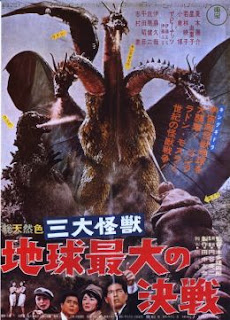 Aka "Ghidrah, the Three-Headed Monster"﻿


You wouldn’t know it from the title but “Ghidorah, the Three-Headed Monster” is the fifth entry into Toho’s “Godzilla” franchise. Retitled and renamed “Ghidrah, the Three-Headed monster” for English speaking audiences, this film ranks as one of the most important entries into the entire franchise as it introduces Godzilla’s toughest and most popular foe, the three headed golden bastard of the title. To top that this entry also serves as the first film to have an all-out monster brawl that doesn’t include only 2 monsters fighting, but a grand total of four. Oh yea… let’s get ready to rumble!

A Martian race of aliens takes control of the mind of a beautiful Asian princess to use her to warn the Human race that galactic monster known as “Ghidorah”… err… I mean “Ghidrah” is on his way to destroy the world. To make matters more difficult, assassins are after her ass and her warnings predictably fall on deaf ears. To make matters worse both Godzilla and Rodan (from the 1956 film of the same name) awake from their slumbers and decide to have an all-out brawl. Can the divine Mothra convince them to combine forces in order to save the Earth?

I love this film for so many reasons. First the camp factor is damn near perfect without getting overly stupid, a factor latter entries into the original series would later degenerate to. This camp factor is heightened thanks to having our monsters being able to talk to each other in “monster language” which totally made me hit the floor laughing. Director Ishirô Honda also heightens the camp by introducing a little comedy into the mix, like having Rodan lift Godzilla into the air and drop him crotch fist onto a power pole. This scene has been dubbed the “dick drop” by fans. Another scene has mothra spit silk onto Godzilla’s face to get his attention resulting in Rodan chuckling, but once Rodan get’s his medicine, Godzilla laughs his ass off… classic! 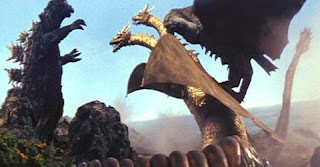 Some fans may not like the new commical additons to the film but I sure did. I mean how seriously can you take ‘guys in rubber monster suits’ anyway? The new three-headed dragon villain is majorly bad ass and the monster brawl approach ot the plot with numerous monsters fighting was loads of fun. Sure the human subplots went nowhere but who really watchs “Godzilla” films for intreeging human interactions. “Ghidorah, the Three-Headed Monster” is hands down one of the best and most entertaining entries into the entire mile long “Godzilla” fanchise and one of the must-see additions.

Godzilla will return in "Invasion of Astro-Monster"