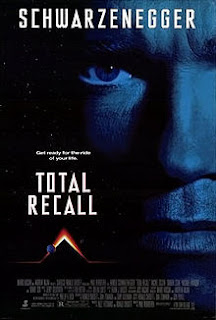 I would not consider myself the biggest Paul Verhoeven fan, but the prospect of a violent science fiction spy film starring a slew of cult actors is a little hard to just ignore. Throw on top of that a very strong and smart script with top notch special effects and dammit, "Total Recall" ends up being a damn fine film. It's certainly not a film for everyone as it runs with some very unusual concepts and embraces some of its cult like over the top tendencies, but this early 90s Schwarzenegger film comes off as both adrenaline pumped entertainment and smart in its science fiction writing.

Douglas Quaid (Schwarzenegger) is not necessarily in the best place in his life, but with a loving wife (Stone) and job security as a construction worker he seems to be doing just fine. Yet he keeps having these dreams of Mars and a lingering feeling that he was meant for something more. Since he doesn't want to ruin his life, he decides to visit Rekall to have a fake memory implanted of a trip to Mars where he was a secret agent playing both sides. When he awakens in the Rekall chair though, he finds himself at odds with men trying to kill him and his skills as a fighter have increased. He no longer knows who he is...and he's not sure whether or not he's dreaming or if the conspiracy is real.

Unlike the "Total Recall" remake I recently reviewed, this 1990 adaption of the Phillip K. Dick short story is a riveting and wrenching experience. There are so many twists and turns that half the time the audience is as lost as Quaid and the film uses this to its advantage to then throw a ton of oddities at us - kicking us around on a nightmarish roller coaster ride filled with corporate greed, spies, gore, and psychic mutants. Now this might all sound like its a little ridiculous and I'll agree that it is, but the themes of the film (the issues of corporate greed and self discovery through present actions) play out quite well with its outrageous plot. It helps that "Total Recall" rarely blinks in selling it's more ridiculous concepts. The mutants are done with stunning special effects and are explained just enough to make us okay with the concept, while the entire alien subplot comes to fruition in a way that the film sells as the norm."Total Recall" then injects enough action and spy motifs that the pacing is palpable. Arnold might not be a great actor in this film, but his charm as an action star helps these ultra-violent action sequences fit right into place.

This science fiction adventure tale is really just a kind of surface layer though. "Total Recall" has plenty of great action, strong special effects, and fast plot to satiate those action fans, but the true highlight of the film is how it structures in the odd reality shifts. When I said that it has a lot of twists, I meant to say that it has a lot of great twists to its plot. When Quaid is in the Rekall office and the salesman pitches him is vacation, what the film is actually doing is setting up the audience for an hour and a half of doubt. The Rekall guy specifically states exactly how the rest of the film will play out and as the film progresses we are left wondering if we are watching Quiad's memory or if we are seeing the after effects of a truly crazy science fiction world. Then the film continually twists these doubts with red herrings in both directions and eventually leaves us questioning how the entire film plays out. It's this science fiction and strong writing that truly makes "Total Recall" the cult film to watch again and again.

"Total Recall" simply has it all. It has manly action set pieces, great B-grade one liners, a smart script, and top of the line execution. In all honestly, Arnold is probably the weakest element of the film as his supporting cast leave him in the dust as actors. It's an odd cult film that will not be sold on every film fan, but if you are willing to buy into these memories for wholesale...then it's a brilliant science fiction action trip that you cannot afford to miss.

Looking for a mind fuck of awesome early 90s action proportions? Then all you need is to simply click the links below and we can make sure you take the trip of a lifetime. Without any of the hassles of taking a real trip to Mars.