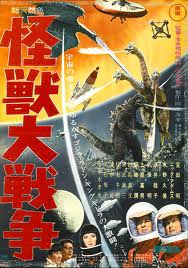 
The monster melee approach to the last “Godzilla” film “Ghidorah, the Three-Headed Monster” proved to be a huge success so Toho continue the trend with this sixth entry into the franchise except for one minor difference… this time it’s on another planet! As you can tell director Ishirô Honda succeeds at making yet another campy delight into the series before the big green guy started to descend down a dark highway of despair and ilk.

A new planet, cleverly dubbed ‘Planet X’ (is this “Duck Dodgers”?!), behind Jupiter. A Japanese rocket is sent to explore the new world and our two astronauts stumble across an alien race that has a little bit of a monster problem. The monster they dub “Monster Zero” is actually Ghidorah, excuse me Ghidrah, and he’s causing them quite a headache. It seems the alien race is peaceful and all they want is to borrow Earth’s monsters Godzilla and Rodan in order to defeat the beast. Being a Toho film we know this alien race can’t be trusted and soon they take control of all three monsters and unleash them on Tokyo. Whatever shall the Japs do?!

Director Ishirô Honda is no stranger to science fiction as he was the go to man for Toho in a majority of their science fiction epics, and many of his famous films in the genre include evil alien invasion plot devices. Though he toyed with aliens a bit in the last film, this love for the genre come spilling over full force in this entry as he takes his films “The Mysterians” and “Ghidorah, the Three-Headed Monster” and slams them together to make this insanely entertaining concoction. Honda also continues his use of small instances of light hearted humor, most notable in a scene where Godzilla celebrates a win over Ghidorah with a ridiculous victory dance… one can’t make this shit up!

“Invasion of Astro Monster” (released in America as “Godzilla vs. Monster Zero” and simply “Monster Zero”) is one of my personal favorites of the “Godzilla” franchise. I thoroughly enjoyed the science fiction heavy plot and loved the idea of our monster fighting on another planet (this is the only entry where the monsters fight somewhere else other than earth). The sci fi heavy plot may turn off some fans along with the continual injection of humor but for me “Invasion of Astro Monster” is an absolute winner and would really mark the end of the solid entries of the franchise as the series would start to drown in the deep end of the pool soon after.

Godzilla will return in "Godzilla vs. the Sea Monster"