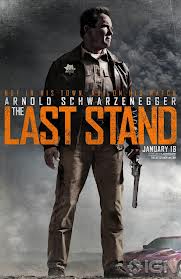 After enjoying my "I'll Be Back Ahhhnuld" marathon all week in celebration of the release of this film, my expectations were only of the highest caliber for "The Last Stand." It's Schwarzenegger's return to leading man status and it was the English language debut for one of my current favorite directors Kim Ji-woon. This combination made it an automatic must see in my book. Luckily, the entertainment value of "The Last Stand" is top notch. The film may not make a lot of sense at times, nor does it pretend to, but Kim Ji-woon seems to understand this and plays the film to all the elements that the audience is there to see.

Sheriff Owens (Schwarzenegger) is about to enjoy his day off. A few of his deputies are working the streets in the small Arizona border town and things are looking to be just right as most of the town leaves for a local sporting event. When a call from the FBI comes in about a Mexican cartel fugitive (Noriega) running for the border, Owens and his deputies will have to band together to make sure he doesn't make it.

I will not try to pull the wool over your eyes, fellow Blood Brethren, because "The Last Stand" is not traditionally a great film. I will not try to justify it as a film that should be up for Academy Awards. It shouldn't be. Half the time the logic of the film was shaky. The beats in its plot progression are very predictable, characters hit all the basic by the numbers arcs without deviating from that well tread path, and the dialogue is about as simplistic as it gets. These are the ways that "The Last Stand" doesn't necessarily impress.
On the other hand, these items never detract from the obvious focus of the film: pure, rated R, unadulterated action entertainment. And if you asked the smile that devoured my face for the entire run time of the film, this is what truly matters for "The Last Stand." Let's be honest with ourselves, did we truly go to Arnold's comeback film for character studies and thoughtful scripting? Fuck no. We want ass kicking action, bigger than life personalities, and goofy one liners. "The Last Stand" delivers on all of that. The casting is damn near perfect as it utilizes an aging Schwarzenegger to maximum effect, even pushing the limits that I expected by having a pretty vicious fist fight in the finale between our hero and villain, and the supporting cast really brings some of the humor to the forefront. Johnny Knoxville might have had a smaller role than anticipated, but it was worth it for all the visual and written jokes.

Kim Ji-woon also knows how to do action. If you have seen his western actioner "The Good, The Bad, The Weird" then you already know this. "The Last Stand" punctuates this by ratcheting it up for American audiences. High octane car chases cascade through corn fields, massive gun battles, and even that vicious fist fight I wrote about earlier rip through the film's high end pacing to give the film enough of an edge that it simply modernizes the golden age of action from the 80s. If you love action, then you need to see this film.

I quite appreciate the honesty that "The Last Stand" seems to dictate. Never does it pretend to be a film that's deeper than it is, only holding enough depth to keep us feeling motivated by the plot progressions, and the film's obvious focus to be a fun and violent film is charming and entertaining as hell. No, I will not claim "The Last Stand" to be a film masterpiece, but it delivers on its promises and that was all that I wanted.