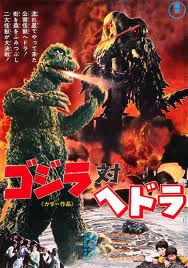 Aka "Godzilla vs. the Smog Monster"


After the shitstorm that called itself “All Monsters Attack”, fans were finally graced with an honest to goodness true Godzilla film where Big G didn’t just exist in a young boys imagination. Was this the return of Godzilla fans were waiting for? Sadly that would be a monstrous HELL NO but in all truthfulness “Godzilla vs. Hedorah” is hands down the strangest and most bizarre entry into the mile long franchise and its peculiarness is what makes the film so damn watchable.

Well in this eleventh entry into the franchise, Godzilla goes green as the filmmakers decide to take an environmental stance… and boy to they lay it on thick! The film opens with a cheesy title song talking about cleaning up the earth and then we are introduced to Hedorah, better known to American audiences as ‘the smog monster’, a goopy creature created by pollution. Can Big G clean up this slick situation before the smog monster lays waste to the world? Will our hero doctor ever leave his bed?

The smog monster is quite a hilarious sight to behold as it takes on various forms with glowing red eyes peeking out of its gooey gray mass. This monster loves to kill people with its sulfuric acid secretions and flinging it’s bodily shit over everything, including a cat! Godzilla seems powerless trying to fight this thing and waves his arms hilariously in the air as if trying to punch something.

Director Yoshimitsu Banno, a new comer to the franchise, decides to change things up a bit to make it uniquely his own and boy did he succeed…. and not in in a very good way. He gives the film a darker look yet he doesn’t match it with a dark tone. He just loads up the film with all sorts of weird concoctions, including short animated scenes to tie the action together. Seriously what the fuck is this? Other oddities include a disco dance scene where a guy imagines everyone having fish heads (which I might add has no relevance to the plot), a building falling with no sound effects, and a sequence filmed in black and white only to change to color when a guy strokes a guitar string. Artistic? Naw… it’s just shit. The film hit’s its bat shit crazy when Big G actually flies through the air backwards with his atomic breath in order to catch the fleeing smog monster.

“Godzilla vs. Hedorah” is a bad Godzilla film no question about it but damn if I can’t say I was entertained. The whole film is a mess but all the artistic pretentiousness left me laughing at its shear kookiness. It may not win any awards from fans but I’ll be damned if director Yoshimitsu Banno didn’t succeed at making a Godzilla movie like none other. Longtime “Godzilla” producer Tomoyuki Tanaka hated the final results, not surprisingly, and guaranteed Banno would never direct another entry again. All this makes “Godzilla vs. Hedorah” worth watching as a curiosity piece alone.

Godzilla will return in "Godzilla vs. Gigan"