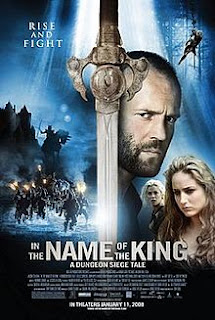 Beyond having the longest title of all time (probably not, but let me exaggerate dammit), "In The Name Of The King: A Dungeon Siege Tale" might also have been the longest film I have ever seen. Not because it truly was all that long, the version I watched clocked in around 2 hours, but it certainly felt that way. It felt excruciatingly long. Like stab your eyes out long. This is because, quite frankly, the movie was not good. I knew this going into the film, much of Uwe Boll's early films are just as poorly concocted, but I was hoping with the scene eating cast that was in it and the general ridiculousness of having a film based on the medieval happenings of relatively popular video game franchise that it might lead to some entertainment. Alas, I was wrong and "In The Name Of The King" falls desperately flat.

Farmer (Statham...and I kid you not his name is Farmer) lives a simple life with his beautiful wife (Forlani) and his son Zeph (Ford). When asked by his neighbor Norrick (Perlman) about joining the king's forces, he says no and continues to farm. When an evil sorcerer (Liotta) decides to overthrow the king (Reynolds), he picks the wrong village to start his rampage on. Now Farmer has a bone to pick and his mysterious past will catch up to make him powerful enough to lead an onslaught against an unstoppable force.

In an obvious attempt to attract the attention (and crowds) that made "The Lord Of The Rings" films so popular, "In The Name Of The King" desperately tries to craft an epic tale worthy of the films it attempts to copy. Unfortunately, it falters at most ends to accomplish this goal. When the charm of the slew of cult actors/actresses that this has in it can't save it, you know you are in for a hell of a ride. The film feels far too long as it forces a ton of characters and sub plots to the surface where they dwell for a brief time. The dialogue is awkward most of the time, the acting seems to be phoned in by all parties involved (including Statham who normally can phone in a performance and it will still be kick ass), and the plot progressions are obvious from the first minute. Half the time things felt drawn out for the sake of making the film seem more epic. The inclusion of the tree dwelling women (lead by Loken) is essentially irrelevant to the main plot and Loken joins the final troupe only to disappear for the finale. It just simply drags.

Even the action sequences, which try to look bigger and badder than they are, take a lot of the film's run time and pull it out. Don't get me wrong, there were some great unintentionally humorous things that happen in these battle sequences (including the appearance of ninja and Statham with the largest and deadliest boomerang known to man), but overall they take too long. I do have to give the film an extra half blood drop for the sake of having a kung fu fight choreographer do much of the hand to hand combat. It doesn't make a lick of sense that a simple farmer is so skilled with swords and aerial combat, but there was some kinda cool stuff going on there.

To be honest, I didn't hate the film. I knew what it was going into it and I focused on having a fun time rather than nitpicking it to death. Yes, it's hard to overlook the massive amount of illogical things that the film does and my rating will show that, but also know that I had some great laughs at the film too. It was awkward in execution, clunky in foundation, and the CGI was borderline silly at times (the flying books of doom!), but dammit that's what a bad movie is for so take it for what it is. Plus it has Jason Statham. Bonus.

If you so feel the need to, there are links below to purchase "In The Name Of The King" for your home collection.