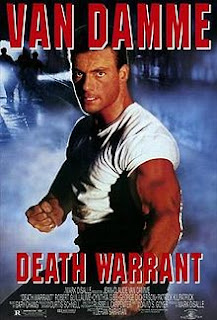 Growing up one of my favorite action stars was Jean-Claude Van Damme and by now you would have thought I was able to see most of his movies. Yet "Death Warrant", one of his more popular ones and one that he was able to build a chunk of his career on, was a film that I had somehow overlooked. Then they made it available on Blu Ray and I decided it was high time to rectify this situation. In an attempt to work my way through his Damme filmography starting with his 90s films and kicking it off with "Lionheart," the next film up with the elusive "Death Warrant." Although it lacks the heart and depth that surprised me with the previously mentioned film, this actioner does showcase the charm and fight skills of Van Damme even if it places him in some ridiculously odd situations to do said showcasing. "Death Warrant" might not make a whole lot of sense (and when it does its a little cliche), but I'll be honest...it was pretty entertaining.

After Detective Burke (Van Damme) spends a good amount of time and energy going undercover to snag the elusive killer The Sandman (Kilpatrick), his reputation has started to grow. It grows enough that a couple of concerned politicians decide to send him undercover into a penitentiary to investigate some mysterious deaths of the inmates. With a young attorney (Gibb) acting as his wife and partner in the investigation, Burke is ready for almost anything with his strong fighting talents and determination. What he uncovers at the penitentiary though goes much beyond his skill set and its going to take everything he has just not to get killed.

At its core, "Death Warrant" is a fairly standard action affair. Tough cop and macho man fighter goes into a prison to find a killer. He has to fight his way to earn some respect. He finds a conspiracy. It all goes to hell. End. It's a fairly predictable plot progression that hits all the right beats in the right places (even throwing in the obvious romantic subplot between Burke and fake wife), so in many ways if you are an action fan you've seen it before. Can't really blame writer Goyer for this one, as it was one of his first scripts, but it does tend to go by the numbers far too much.

When the film does deviate though...man, it throws it out there. The twist of why the deaths are happening is pretty blatant by the end of the first act, but its how our hero gets there that makes it so strange at times. By the time he goes to visit a red eyed 'godfather' type figure in the prison named Priest who lives in a cage decorated with sheets and keeps a few transvestites at his sides, I was thoroughly entertained by the ridiculousness of the film. It helps that the casting of the film adds quite a bit of charm with Van Damme showing just why he would be a star later on and a supporting cast that seemed to realize just how ridiculous the script was and knocking it up a notch. The overall plot might be predictable, but I'll give it to "Death Warrant" that it did its best to keep us invested the entire time.

Now that I've written two paragraphs on the damn story, let's get to the real reason someone watches a film like "Death Warrant"....THE ACTION! Unfortunately, the action is a little light here. It's relatively meaningful (unlike the ridiculousness of the fights in "Lionheart" which are more entertaining), but overall the lack of strong fights does hinder the film. The film obviously wanted to be more of cop investigation thriller than a straight up action film and this focus does tend to lean the overall experience of action to be disappointing during the film.

That is, until the finale, of course. Here we have the only truly memorable sequence of the whole film. A massive showdown between Burke and The Sandman, man vs man, in a massive underground multi story boiler room. Rarely does it make sense (Why is this boiler room like four stories tall and built like a maze? Why does Sandman open the furnace? Why doesn't Van Damme see that massive wrench flying at him before it slams him in the face?), but when it comes to entertainment I'm willing to suspend my sense of logic and belief. If you do this for the finale, I guarantee you will be entertained.

"Death Warrant" might be a relatively by the numbers action film, but it doesn't get by without some of that charm to make it entertaining. The action is too light, the plot is too goofy at times only to be too serious at the next moment, and it's predictable. It's not a great film by any means, but by God, it has charm with its casting and in its finale. That counts for something, right?