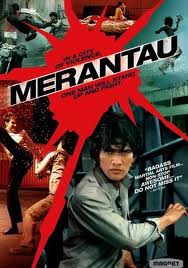 After experiencing the brilliant action and martial arts of "The Raid: Redemption" (both in theaters and repeatedly on home video), it became necessary that I experience "Merantau" - the first film from the combo of director Gareth Evans and actor Iko Uwais. Luckily the film is on Netflix Streaming for those interested in just viewing it, but as far as I'm concerned this is a must own martial arts film. It's heart felt, action packed, and Evans uses just enough of an artistic eye to make it deeper than your average film. It might not be quite the intense experience of adrenaline that "The Raid" is, but "Merantau" is almost as good in every aspect.

Yuda (Uwais) is a simple farm boy. He's from a loving family, he farms, and he has been practicing Silat martial arts to start his own training facility. So for his merantau, a journey away from home in becoming a man, he travels to the big city to find his way and start his school. The problem is that he is unprepared for the horrors of city. He finds a young 'dancer' being beaten by her handler and decides to uphold justice by using his martial arts skills. Now Yuda must fight his way to protect himself and his new found friends as a whole string of thugs come after him.

There is a great classic martial arts foundation to "Merantau" that this film builds on. A wandering hero comes into a corrupt place to use his kung fu talents to uphold justice. The Shaw Bros studio used this same idea a hundred times and its modern films like this that prove it can still work. Although the idea might be a well treaded one, it's the combination of of sincere acting, Evans' ability to add depth and artistic merit, and stunning fight work that make "Merantau" a riveting watch.

To be honest, I'm stunned at how strong the character work was in this film. "The Raid" went light with exposition, but "Merantau" slathers it on thick. A few fellow kung fu fanatics claimed the film is a little long in its first half and to an extent this is true. It spends a good portion focusing on building up our hero and establishing some solid chemistry with a few supporting characters. This includes a few scene stealing moments from Yayan Ruhian (who played Mad Dog in "The Raid") as a fellow Silat expert that pays off in dividends in the final act. The heart and character work here is irreplaceable in the end though as it really builds up a great performance from Iko Uwais and establishes a connection with audience that makes the finale much more impactful.

It's the second half that is much more like the Evans and company that "The Raid" made a household event. Uwais carries this film with strong character work, but its his fighting talents that are going to make him one of the biggest action stars in the world. And its damn near non stop. The fighting might not be as intense as we would see him do later, but the benefit of stronger sets (abandoned storage units, alleys, and dance club for example) and use of weapons make for a pretty unique experience too. The highlight, sans the extensiveness of the finale, does happen to be a stunner fight inside a closed elevator though. The action is simply top notch.

I was shocked how much I enjoyed "Merantau." Gareth Evans' debut film is a brilliant martial arts that contains a ton of heart and some great character work. At times it tends to be pretty predictable with its plot beats, but that doesn't stop it from being deep enough to connect and action packed enough to entertain. Just what I want from a film like this.