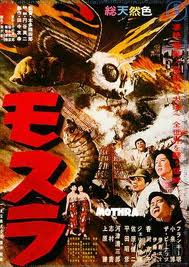 
The kaiju (monster in Japanese) film genre had been extremely kind to Toho studios with “Rodan”, “Vanan the Unbelievable” and two “Gozilla” films earing generous returns in profit. Times were changing though and the formulaic monster on the loose plot was growing tired so they decided to mix it up a bit by making their new monster creation, Mothra, a divine female that only destroys when it’s two twin miniature fairies are in danger. It sounds strange only because it is.

After a ship sinks in a typhoon and the survivors are rescued off an island utilized for nuclear testing (what’s a Toho film with a nod to atomic horrors). They speak about a indigenous tribes though the island is supposed to be desolate. A scientific team is dispatched to the island where they discover two twin singing fairies (played by real life singing duo ‘the peanuts’). A corporate ass kidnaps the girls and takes them back to Japan to exploit their talent, unaware that their protector, a giant moth, is on its way to rescue them and destroys anything in its path to do so.

Director Ishirô Honda previous giant monster flicks were mostly downbeat focusing on death and destruction. Here he takes the idea with lighter heart making the film more of a colorful adventure. Speaking of colorful, he previously made Rodan in Color (“Godzilla” and “Varan” were shot in ‘old-fashioned’ black and white) and he utilizes his color palet more creatively here by loading the film up with lush colors and backdrops. The special effects, for an early Toho film, are also good (much better than later Toho productions) with Mothra’s transformation from a caterpillar to a winged insect quit memorable.

In my humble opinion “Mothra” is one of Toho’s best kaiju efforts despite its monster not being nearly as threating as a towering fire-breaking reptile. The cast, effects, direction and photography are all top drawer material from the company making Mothra Toho’s second most famous monster second to the obvious Godzilla. Mothra, along with her two twin fairies, would make multiple appearances in the Godzilla franchise to come, the first being his main opponent in “Mothra vs. Godzilla” and later in the 90s breaking free to star in the “Rebirth of Mothra” trilogy.

Own the original "Mothra" by clicking the link below!