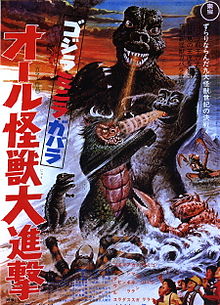 
I will be blunt up front – “All Monsters Attack” fucking sucks. Released in America as “Godzilla’s Revenge”, “All Monsters Attack” was the return of Godzilla after what was supposed to be the final entry into the franchise with “Destroy All Monsters”. It was NOT the glorious return fans were hoping for and instead seems like Toho’s cheap cash-in on the their own character regulating him to a stock footage filled after school special only forgivable to the most hardcore 5 year old boys in the audience.

This dog turd of an entry has a young boy being bullied at school which isn’t helped by a distant relationship with his workaholic dad. In order to escape his depression the boy day-dreams himself onto ‘monster island’, befriending Godzilla’s son “Minilla” (who has the ability to change his size and even talk!) in order to beat his adversary Gabara, a ginger haired knobby skinned version of Godzilla with a cat-like face. In the words of Manilla “My dad says I need to learn to fight my own battles”, can the boy take his lessons from monster island and apply them to the real world after he gets kidnapped by some bankrobbers?

As one can tell this isn’t a ‘true’ Godzilla film by conventional means as all of the footage of Godzilla is only within the boys imagination. To top it off a majority of the footage in the boys day dreams is stock footage from “Godzilla vs. the Sea Monster” and “Son of Godzilla”. I’m talking loads and loads of shameless stock footage and nothing cheapens or angers a film and audience more than fucking STOCK footage. Perhaps the biggest sin this sequel makes is that it’s helmed by Ishiro Honda, the legend that directed the original! How the holy hell can a respectable director like Honda be responsible for this piece of monster shit?!

“All Monsters Attack” is the rotten egg of the entire Godzilla franchise. Some stick up for the film for being a light hearted life lesson tale that just happens to have Godzilla. I don’t buy it. Its Toho’s cheap cash-in on the very franchise they started. The childish life lesson plot and shoed-in stock footage makes this reek of made-for-tv afterschool special for little boys and girls that like Big G. The good news is that the franchise can only go up from here (how could it not?) but the bad news is fans are in store for a string of bad sequels to come .

Godzilla will return in "Godzilla vs. Hedorah"