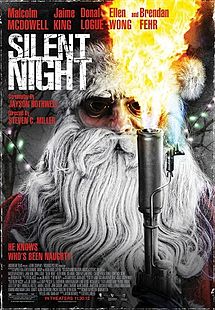 Far be it for the cult fan in me to say, but I was kind of excited for this "Silent Night, Deadly Night" remake. The original one is certainly a fun and off beat cult classic, but there is most definitely room for some improvement. The problem with Steven C. Miller's new take on the killer Santa holiday horror flick is that it really doesn't improve on the original. It does some solid enough things with style and contains a few clever ideas, but once again the balance between horror and humor seems off with this film and it leaves a rather odd aftertaste when the credits roll.

Deputy Bradimore (King) and Sheriff Cooper (McDowell) are anxiously awaiting the massive 'Parade Of Santas' that their home town hosts every Christmas. Unfortunately, there is a new Santa in town. One with a sack full of weapons. One that is out to punish the naughty. As the body count piles up, these two law enforcers are going to have to use every available option to try and beat the madman to his next victims...and they just might be on his list.

The premise is simple here. Killer slasher Santa on the loose and two officers have to take him down. We've seen it before, so when it come down to it - the film better have some clever plot twists or strong execution to make it work. "Silent Night" rarely is exceptional at either. It tries very hard to do both, adding in entire back stories to who the killer might be through some historical flash backs and Miller adds enough style to the film to keep it interesting, but ultimately it can't save the film.

In these attempts to add depth to the story while keeping it light hearted enough to still pull elements from the original film (including that damn crazy Grandpa scene), the film fails to balance itself. McDowell is obviously the comedic relief of the film where he spouts arrogant things about being awesome and references "CSI: Miami" at one point, but the humor tends to feel forced. Then Jaime King's character is built to be a protagonist we really care about (and her rather impressive acting performance does help), but too often her character's story is too vague. We don't even know who her lost loved one is...I assume it was a husband...

Don't get me wrong though, in the end "Silent Night" is a slasher and it does have the elements of a slasher in full. Gratuitous violence? Our killer does kill a little kid with a fireplace poker in like the first half hour. Gratuitous nudity? Our killer does chase a porn model shirtless through an empty tree lot only to find a piece of machinery that tends to be pretty gruesome when used. Clever kills? Santa with a fucking flame thrower. Yes. Give that one a check. Not to mention that director Miller does his best to keep the film flowing with enough style to keep us interested. Although the finale tends to be a little by the numbers, he throws different rooms into green and red glows for some Christmas giallo like spirit for example. In many ways, I was reminded of the over the top feel of the "My Bloody Valentine" remake even if "Silent Night" fails to take it to that sort of level.

"Silent Night" is what it is. It's a modern slasher with enough style and slick production values to make it an entertaining watch, but as a remake it never really tops the original in any sort of way. It still fumbles at balancing the horror, story, and humor and despite some solid acting performances (and a fun asshole role for Donal Logue) just fails to progress past its more cliche moments. Slasher fans will still want to see it, but its not something that's a "need right now" kind of flick.

If you feel the need to add "Silent Night" to your collection for some holiday horror all year round, then click the links below and add it. We thank you in advance.
Posted by DarkReif
Email ThisBlogThis!Share to TwitterShare to FacebookShare to Pinterest
Labels: Horror, Slashers