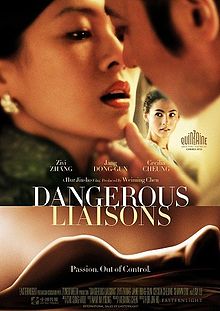 I'm not normally one to dive into a film like this, let alone feel the need to write a full review on one, but this latest adaption of the French story "Dangerous Liaisons" impressed me. I had read some very good things about this dramatic love story and when the chance to review the beautiful Blu Ray appeared, I grabbed the chance. "Dangerous Liaisons" is a film filled with dramatic endeavors and nuanced performances that relies very much on the talents of its actors and the subtle eye of its director to work. Both of which are impressively crafted in this Chinese adaption. So much so, that I felt inclined to share my thoughts on the film with the world.

Xie Yifan (Jang Dong-gun) is a wealthy business man and self proclaimed play boy. In 1930s Shanghai, he can have any woman he wants. Except one. Mo Jieyu (Cecilia Cheung) is a banking chairwoman and he has fallen for her immensely and will make any reason to be close to her. That's why he agrees to a rather odd bargain. He must bed the reluctant and awkward Du Fenyu (Zhang Ziyi) without falling in love and Mo Jieyu will let him have her. It's a deal he cannot refuse even if he suspects that his partner in crime has something more sinister up her sleeve.

Films with the tag "drama" tend to be overlooked in my household. Nothing against them, but when you are a writer for a cult film site, they tend to fall to the wayside. "Dangerous Liaisons" caught my attention and I'm glad it did. It's a strongly executed film that kept me engrossed in the love lives of 30s Shanghai upper class. This is a concept that holds no merit for me (not being from the 30s, living in Shanghai, or being upper class), but I'll be damned if "Dangerous Liaisons" didn't make these matters of the heart seem like life or death situations.

Most of acclaim has to go to the actors/actresses involved. Our main three leads ably devour scenes with subtle and stunning performances (Jang Dong-gun's sly smirk had a thousand interpretations and I'm pretty sure he used them all), while the chemistry between them was so intense and thick that it felt like it could be cut with a knife. The story might be a rather well known one at this point (I'm pretty sure that I've seen at least two other film versions, not including films that intentionally rip on it), but "Dangerous Liaisons" keeps it brisk and moving with its tight script and strong acting so that I never felt bored even if I knew what was going to happen.

It also must be mentioned that setting the film in 1930s Shanghai was an inspired move. The subtext of Japanese occupation that's hinted at through the characters makes for a unique and historical backdrop to place the film in and director Hur Jin-ho beautifully captures the style and look of the time with stunning visuals. The set design, locations, costumes, and look of the film are all brilliantly set as the time and place. Although I wouldn't have minded a bit more context of the period to be played up (it's pretty subtle most of the time), I felt that "Dangerous Liaisons" caught the essence without deterring from the character work and chemistry.

"Dangerous Liaisons" might not be normal Blood Brothers affair, nor is it of my own, but the film was a dramatic firecracker. It's a beautiful looking picture with its brilliant designs and the flair of its cast outshines it all with a sparkling shimmer that not many films can achieve. It might not be original, but the film ably spins the classic tale in such unique ways that it's hard to ignore for foreign film fans.

If you feel so inclined to experience "Dangerous Liaisons" in the unique way that this 2012 version does, feel free to use the links below to pick up your copy for its February 12th, 2013 home release from Well Go USA!